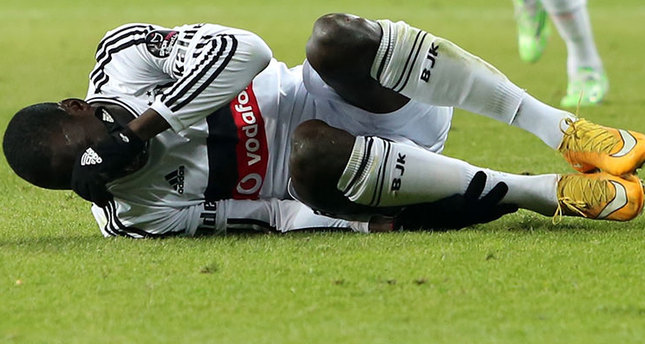 Beşiktaş's Senegalese striker Demba Ba appears to be suffering from the evil eye after a goal-laden start to his career in Turkey with 15 goals in 17 games for the Istanbul side.

Ba suffered a fracture in his toe after a blow in Sunday's Süper Lig game against Trabzonspor. Speaking to the club's TV channel, Beşiktaş's chief physician Ertuğrul Karanlık said the player suffered a strike on his right foot but managed to finish the first half. "He wanted to continue playing but could not endure the pain. We examined him again after the game and found fracture on the second toe," he said. Karanlık stated that "it could be worse."

"He still feels the pain and will undergo treatment. He needs a total rest and we hope he will be back with the team soon," the physician said. Still, Ba will miss UEFA Europa League Group C match against Tottenham Hotspurs in Istanbul on Dec. 11, as well as a the Spor Toto Süper Lig game against Gaziantepspor this weekend.

Ba's injury follows a more serious blow to the team with the injury of top striker Mustafa Pektemek, whose head-on collision at the recent Trabzonspor match with Trabzon's Essaid Belkalem caused a fracture in his nose. Pektemek had replaced Ba in the second half of the match.

Ertuğrul Karanlık said the young striker underwent a four-hour surgery and was recovering although he would have to stay at the hospital for a couple more days for further treatment. "He suffered from a serious injury but thankfully, it will not have a serious impact on his health," the physician said. He also spoke about the health of Beşiktaş' other injured players and said goalkeeper Cenk Gönen will likely miss upcoming games due to treatment after his decision to play against Kardemir Karabükspor. Oğuzhan Özyakup and Tomas Sivok, two other injured players, are recovering, according to Karanlık, though they have not recovered enough to play in the upcoming games. Meanwhile, Uğur Boral has largely recovered and joined training sessions this week. Karanlık said he will likely join the team next week.