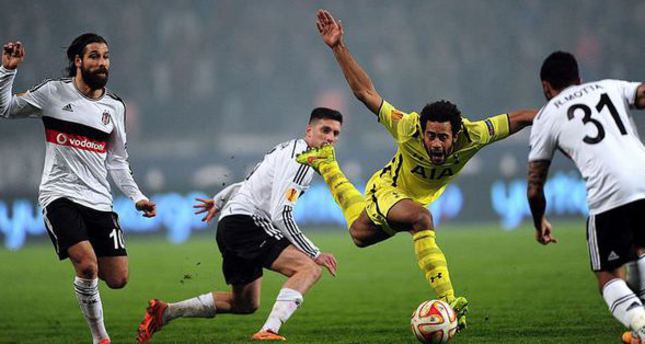 Beşİktaş took the top spot in the Europa League Group C to secure a favorable seed in the next round of the competition after being Tottenham Hotspur 1-0 in Istanbul. Cenk Tosun netted the only goal of the game, turning in Olcay Sahan's centered pass, aptly filling in for the injured Demba Ba, who missed the game due to a toe injury picked up at the weekend in Beşiktaş's 3-0 victory over Trabzonspor. The win keeps alive a pair of impressive streaks for Beşiktaş, who have now won their last six home games in the Europa League as well as going the entire group stage of the competition unbeaten. Tosun struck in the 59th minute, not long after rattling the Tottenham crossbar with a thundering effort that would have gone down as one of season's best goals had it been a crossbar's width lower. The game may in future be remembered more for the power outages that left the Atatürk Stadium in darkness for long periods, twice suspending the game. The fans took the opportunity to enjoy some gallows humor, continuing to sing and jump while holding aloft their phones. Their fervor dissipated once they realized it might be a while until the game restarts. The Beşiktaş faithful were at least able to enjoy a positive show when the lights returned, although Tottenham coach Mauricio Pochettino was far from impressed about having to twice remove his players from the field in darkness, describing it as "difficult to explain" and claiming that the outages reflect poorly on UEFA and the competition.

"We had a chat with the referee and you need to accept the situation," said the former Southampton manager. "It's frustrating if that happens, it was laughable. It's not good for the reputation of the competition." The power outage did at least bring incident to the occasion. The first half was understandably low on rhythm with the away side on top, if only by virtue of being the best of a bad bunch. The heavy pitch from an evening's rain made matters all the harder. Tottenham did create a few chances in the opening 45 minutes but the wasteful Roberto Soldado, who is still struggling for form after a big-money move from Valencia two summers ago, repeatedly failed to make the most of what was given to him. The first power cut came after just seven minutes, stopping the game for around 15 minutes. When they returned to the field, Tottenham continued on top with both Nader Chadli and Soldado going close, with the former actually getting the ball in the goal before it was ruled out for offside. Beşiktaş never really came alive until the second half, but unlike their guests, they were able to take what came. Serdar Kurtuluş had an early effort before Tosun sent shudders through Michael Vorm's crossbar. It proved to be something of a warning signal. Moments later, Sahan pass-come-shot from a high ball fell into the path of Tosun who finished from close range. The win put Beşiktaş top of the group and into the next round as the first seeds, increasing their chances of a favorable draw. Tottenham coach Pochettino found himself complaining about more than just the lighting system at the Ataturk Stadium. "We deserved more tonight, we created many chances," Pochettino said. "We didn't score and in football you need to score."It is always bad when you need to stop two times for the floodlights. If all the stadium switched off the lights, then maybe you would understand because something wrong has happened. But all the stadium was with light, except the pitch. But it is not an excuse."