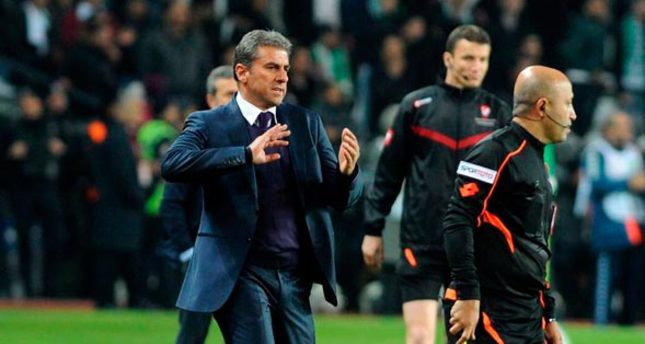 Galatasaray’s head coach Hamzaoğlu distanced himself from his side’s 5-0 thumping of Konyaspor on Saturday, saying the players have finally unearthed their potential

Turkish giants Galatasaray picked up their second straight league win under head coach Hamza Hamzaoğlu, helping to crush memories of the club's 4-1 home loss to Arsenal in the Champions League in the week that ended a depressing campaign for the Yellow-Reds. While the club is now out of Europe, they are beginning to fly in the Turkish Super League with the sacking of Cesare Prandelli appearing to revitalize the team.

While from the outside it would appear that Hamzaoğlu's presence has helped unburden Galatasaray, the man himself refuses to take the credit. "I don't think it has to do with me," said the former Turkey assistant coach, adding, "Our players have unearthed their potential. I hope we will go on this way and I congratulate my players. Although we found the net early, they continued their good performance despite us being under no pressure. My players put in an incredible performance; Konyaspor have good players, so we are happy with this result"

While Hamzaoğlu pleads modesty, one of his star players disagrees. Brazilian international Felipe Melo, a star player who was forced to shuffle into new positions under Prandelli, praised the new Galatasaray coach, crediting him for creating a new lease on life.

"After our head coach changed, the mentality of the squad changed. However, the score should not mislead football fans. Konyaspor is a very good team and there was a good atmosphere in the stands. We have to work hard with same desire," Melo said.

The Lions took home the victory thanks to the goals of Turkish strikers, Umut Bulut and Burak Yılmaz (2) and Turkish midfielders, Emre Çolak and Hamit Altıntop.

The 5-0 triumph against Torku Konyaspor is the biggest win for Galatasaray this season, a welcome change to the heavy humblings they have suffered. The win put Gala on 28 points in the league and well within the title mix.

Konyaspor head coach Aykut Kocaman admitted after the game that his side had been somewhat humbled by their bigger opponents.

"We have nothing much to say; it is a very heavy defeat. It is not surprising to be beaten by the three big teams in Turkey, but this result got us into trouble. Galatasaray played one of the very best matches in their history, and it is a very disappointing result on behalf of both myself and the team," Kocaman said.