No country for Italian man 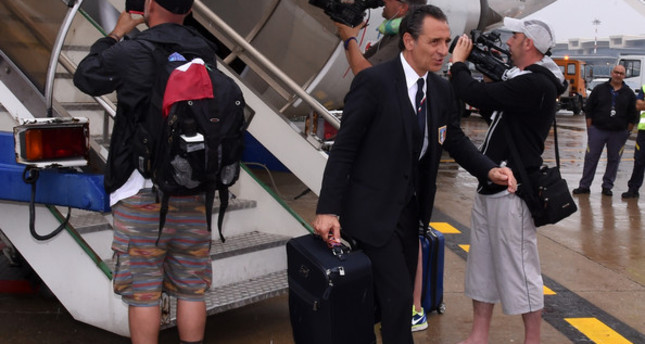 by Arda Alan Işık Dec 16, 2014 12:00 am
Galatasaray is acting like a Dostoyevsky character these days. The inconsistent and unpredictable nature of the team makes one wonder what is happening at the club. With Cesare Prandelli barely out of the door, there has been a rapid turnaround and some marked changed from the Prandelli era. Fanatik columnist Serdar Dinçbaylı said this situation could be derived from players' resistance to Prandelli. "The players are selective about coaches and if they do not like the coach they do everything to make him lose his job or, more precisely, they do not do their job. Given that, in the case of an unsuccessful period, the administration cannot fire 30 players but it can finish off the coach in a minute. If the situation is like that in Florya, it means players control everything and they would not hesitate to attempt another coup."

Dinçbaylı's viewpoint has a lot of respectable points, but players cannot do it on their own. When it comes to a coup against a coach, the administration is never as passive as Dinçbaylı makes them out to be . Actually, a coup d'état needs three major actors; the media, the players and the administration. Firstly, I agree with Dinçbaylı, everything starts with players' lack of will to adapt to their coaches' system and their will to go back to their comfortable situation with a "lazy" coach. Ultimately, bad results immediately follow and the media starts getting on the coach's back, because the players are not the only ones who love their comfortable situation. The last link in the chain gang, the administration, which is equally as fond of the status quo, drops the axe and everybody's happy.

The Prandelli situation is almost identical with the case of Ersun Yanal in Fenerbahçe. Both Prandelli's and Yanal's "sin" was pushing the limits of their team and putting extra effort in to take these major powers of Turkish football to a higher level of football. Nevertheless, this is not something you can do with players who are already satisfied with their position. It isn't obvious why these players can become so satisfied and spiritless when in their 20s. Clubs pay enormous amounts of money to these 20-something players, the media exaggerates their success and the fans just wait for a derby victory. Nevertheless, as we saw in Galatasaray's failed "re-conquest of Europe" (their obsession with the 15 years since their UEFA victory is another topic altogether) this domestic plan is not effective against international rivals. The Turkish "Super" League is shaped by the same relationship triangle between players, media and administration, the only thing that changes is the amount of money. But other European teams plays this game much more fairly when it comes to financial issues.

A country like Turkey, which is aiming for more transparency in politics, should not implement its football with Soviet-era structures. Except for some clubs owned by Arab sheiks or Russian oligarchs, high-level European teams are financially open and accountable. Nevertheless, Turkish clubs are not even corporations yet but they are able to spend millions of dollars in an evening. No supervisional body, no governmental control, no nothing. They literally created a huge habitat for themselves and no one seems to have a problem with it. If you try to create an alternative way for this primitive football style, you should keep in mind what happened to Cesare Prandelli, Ersun Yanal, Vincente Del Bosque, Joachim Löw, Bernd Schuster, Frank Rijkaard and so on...

On the other hand, Hamza Hamzaoğlu has a good relationship with Fatih Terim and, as well as his success at Akhisar, Terim was the main factor in making him the new Galatasaray coach. Given that Abdurrahim Albayrak is also a "good fella" of Fatih Terim, Hamzaoğlu will not have problems for a while. Added to that, the players seem to "love" their new coach, they play with motivation, an alien concept in the Prandelli era. Nevertheless, Hamzaoğlu should keep in mind that their love can change quickly, and they will not hesitate to use it if they are pushed to their limits.