Turkish football boss to run for the post again 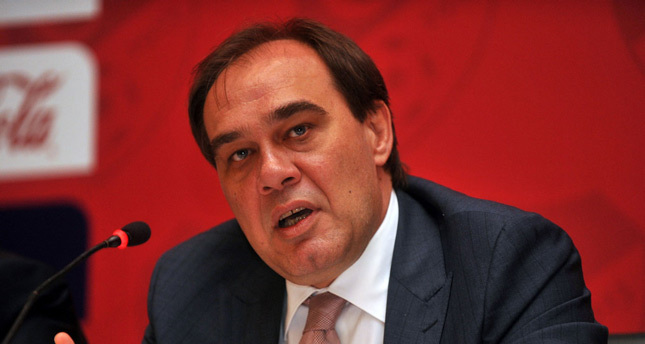 by Daily Sabah Dec 19, 2014 12:00 am
Turkish Football Federation President Yıldırım Demirören, has announced that he will once again run for the presidency and has laid down his commitment to national team coach Fatih Terim, saying the manager will continue with the team even if they don't qualify for the European Championship. Speaking on Turkish news channel NTV on Wednesday, Demirören also talked about the current situation of the national team, saying, "Unfortunately, we are not as successful as we should be. Our spectators cheer according to the score, we did not think ahead."

He said their contract with Terim is a long-term one and that they want a team that achieves permanent success. "The national team might be defeated by the Netherlands but Turkey still has a chance to participate in the European Championship. Unfortunately, we are not doing as well in the group as we should be. But I do not choose who we are going to play. The best players in the league are chosen for the national team" Demirören said. "We need to change the way we think," he said, adding, "No club or federation signs a contract with a coach with failure in mind. If we think ahead and concentrate on the youth setup and have faith, all the problems will be solved. We have to save Turkish football from this mentality."

When Terim took charge of the national team, he accepted a unique contract of five years with the option of two more. Demirören stood by his decision to give Terim time to work his magic with the national team, while admitting that he recommended Hamza Hamzaoğlu to Galatasaray.

After a question about Hamzaoğlu's departure from the national setup to join Galatasaray, Demirören said, "This is normal. The Galatasaray officials first called Terim to receive his blessing and he directed them to me. Abdülrrahim Albayrak [Galatasaray official] called me. The next day Hamzaoğlu told me that he want to signed with Galatasaray. I told him that he can be successful there and he assured me that he will. I told Albayrak to stand behind Hamzaoğlu, no matter what."

When reporters asked him whether we will run for the presidency one more time or not, Demirören stated, "I have never quit. There is so much to do in the federation. I will run again for the presidency." After being questioned about whether there is there any political intervention in Turkish football, He said, "No. Even in the most democratic countries football federations want to be close with the government since we are operating hand in hand with them.

"Currently, 42 stadiums are under construction and they are all financed by the state. We are having dialogues directly with the government about taxations. We need a sports act to enter into force to regulate these bureaucratic procedures. We have a prime minister and president who love football. If people do not have malicious intentions, they will support us in every way."