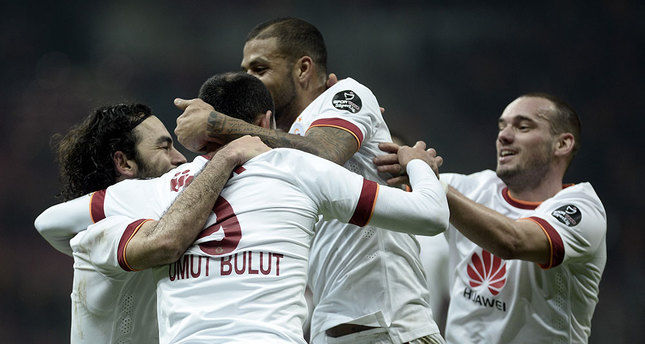 by Daily Sabah Dec 22, 2014 12:00 am
Galatasaray defeated Mersin İdmanyurdu 3-2 in the 14th week of the Spor Toto Super League on Saturday at the Ali Sami Yen Sports Complex TT Arena. While the Lions won their fourth consecutive Super League game, they are currently first in the league with 31 points.

In the ninth minute, Güven Varol registered the first score for Mersin İdmanyurdu. Nine minutes later, he scored once again, but this time it was an own goal registered for Galatasaray. After the referee punished an act by Aurelien Chedjou in minute 26 and awarded the visitors a penalty kick, Milan Mitrovic took the kick to score. Galatasaray completed the first half one goal behind. During the second half in minute 55, striker Burak Yılmaz scored the tying goal for Galatasaray - his ninth Super League goal - after a penalty kick was awarded to the Yellow Reds. In minute 79, Umut Bulut scored with the effort and assist coming from Sabri Sarıoğlu.

However, Galatasaray's head coach Hamza Hamzaoğlu was disappointed with his team's performance despite the win. "We were expecting a dip in form after four tough games, but I did not expect our game to drop this much," Hamzaoğlu said, adding, "At least we performed well in the second half and got the three points. Mersin were a tough side to beat, they were great opponents. I want to congratulate [Mersin manager] Rıza Çalımbay with the work he is doing; he really deserves a lot of praise."

Çalımbay also admitted he was disappointed with the 3-2 loss against Galatasaray and believes his side were the better team on the night. "Going ahead against Galatasaray is not important, winning the game is important," Çalımbay said. "We did deserve to win the game but only have ourselves to blame. The chances we missed when we was 2-1 up and when the score was 2-2 were unacceptable," he added.