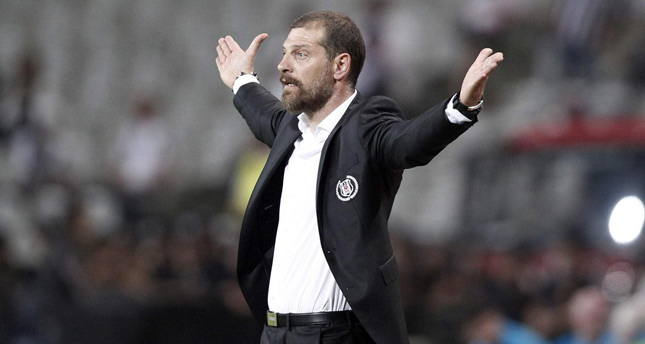 by Kenny Laurie Dec 23, 2014 12:00 am
Beşiktaş manager Slaven Bilic is looking to ring changes inside the club despite his side winning their sixth-straight league game after beating Akhisar Belediyespor 3-1. The Istanbul team are in irrepressible form, winning at will in the domestic league while rolling in Europe. Cenk Tosun was again on the scoresheet, opening the scoring after 24 minutes by nodding in Olcay Şahan's cross before Jose Sosa whipped in a stunning free kick 23 minutes into the second half.

Akhisar pulled one back through Bilal Kısa Goal-of-the-Season contender, a ripper from 30 yards with 15 minutes left of the game. Gökhan Töre sealed the win in stoppage time with a bullet effort at the near post. Despite the win and good form, Bilic was still unimpressed with his side's fitness and penchant for taking their foot off the gas.

"It was a tough game but I thought we did enough to deserve the victory," Bilic said. "We were excellent in the opening 25 minutes, but our performance dipped in the second half. The players grew tired and you cannot afford to play under full capacity against a tough side like Akhisar. We have to learn how to concentrate better and see games out. The next four games are all going to be very tough but we will have the added bonus of having a few key players returning. We were without Demba Ba again and Gökhan Töre was ill but both managed to make an appearance late on. This was a vital game, but we need to train a lot harder, I will be making some changes in training to improve our fitness and performance," he added. Even without star striker Demba Ba, the team hasn't missed a beat with his replacement Cenk Tosun standing up in his absence to score five goals in five games. Tosun's diving header was set up by Şahan who jinxed down the left wing before delivering the inch-perfect cross. With Ba returning to fitness, it's likely that Tosun will make way for the Senegalese despite the good rapport Tosun has developed with Şahan.

"I have Olcay to thank for my goal, he set it up for me with a beautiful cross," Tosun said. "It was a typical Olcay cross, sheer class and precision. The cross was at the right height and speed, my header was accurate and powerful, it was a good goal, I am pleased with my finishing. We are doing really well right now, it is tough when our rivals keep winning, it leaves no room for margin. We worked hard on our game in training and analyzed the opposition well."

Şahan said, "I am pleased with my assist, I deceived my marker and delivered an accurate cross. This was the second time I have provided an assist for Cenk Tosun. We have a lot of players out injured but we are coping well. This was another solid team performance, we played really well in the first half but I have to say Akhisar did have the upper hand in the second half. For eight weeks now, we have played two games a week with lots of injuries and suspensions. Of course, some of the players are starting to feel the strain and fatigue has been setting in." Elsewhere, Trabzonspor coach Ersun Yanal was left "unimpressed" with his side's 3-3 draw with Bursaspor. The result leaves Trabzonspor in the fifth spot while Bursaspor sit in seventh.

Özer Hurmacı opened the scoring for Trabzon before Fernandao equalized from the spot nine minutes after the opener in the 25th minute. Ozan Tufan gave Bursaspor the lead four minutes later before Yusuf Erdogan netted on the stroke of half time. Sercan Yıldırım again gave Bursa the lead, but it was cancelled out by Mustafa Akbaş's 80th minute equalizer.

Trabzon coach Yanal was left cold by his side's performance, despite the entertainment value of the game.

"Well, it was a great game for the neutral, this game had it all - end to end football with both sides creating countless chances," Yanal said. "Personally I am not very impressed with our performance, there are aspects of our game worthy of praise, but we have many weaknesses. We are able to attack effectively, our attacking organization is good but defensively it is another story. We must defend better, a lot better, our current level of defending is way below what I expect.

"We concede goals too easily, it is unacceptable to be conceding such soft goals. This team has a lot of potential, but we will not be able to achieve our goals defending like this. Both teams could have won at the end of the day, a draw was a fair result."