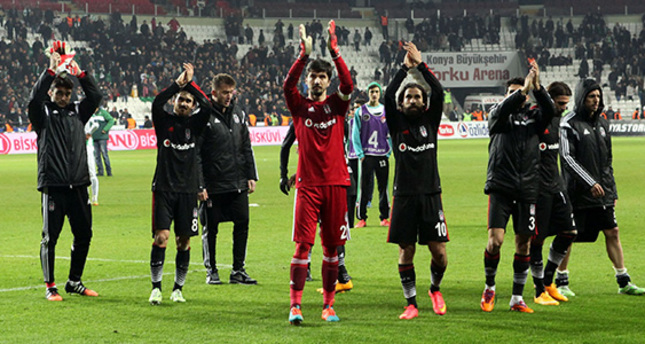 Beşİktaş picked up their seventh-straight league win as they kept a tight grip on the top of the table following a 2-1 win over Konyaspor in the latter's new stadium. The league leaders welcomed back Demba Ba after a foot injury as well.

Gökhan Töre and Jose Sosa were on the scoresheet for the Black Eagles, in the 18th and 58th minute, respectively, while Konyaspor's only goal came five minutes from time with Hasan Kabze scoring from the penalty spot.

Despite the redundancy of Konyaspor's goal, Beşiktaş head coach Slaven Bilic let loose on the referee after the game, calling the decision to give a penalty a "joke," although he did reserve praise for Konyaspor's new stadium and the atmosphere created by their supporters.

"The penalty that the host team were awarded was like a joke. The host team's new stadium has a great atmosphere and it's a perfect one. The rivals' fans can create a scary atmosphere. It's very difficult for guest teams to play in this new stadium," Bilic said.

Bilic, a man never afraid to express his real feelings, has constantly criticized his team's play despite their seven-match winning streak in the league; Sunday was no exception.

"In the first half of the match, we were not good enough from the point of view of our technical and tactical aspects. We found the net only thanks to Gökhan Töre's individual skills. Our rivals played better than us, but they could not get into a scoring position. We played better in the second half and it was a terrific goal by Sosa. After we scored our second goal, Konyaspor put the pressure on us. But the penalty was like a joke. After that, Atiba Hutchsion was shown a red card. Although we did not play very well, we deserved to win," said the Serb.

Bilic criticized Atiba's red card, saying, "Please don't misunderstand me. I have defended Atiba after the [Europa League] Asteras match. I'm very angry with him and he will be punished. He unnecessarily warned the referee. I am not mad at him because he will not be able to play against Galatasaray; I'm mad at his behavior."

Beşiktaş's players made a gesture to the Konyaspor fans out of respect for their new stadium. They did not pump their fists in celebration after the win. Winger Olcay Şahan said, "Konyaspor fans have a new stadium and they filled the stands. So, we did not want to disrespect them and we didn't fist pump. We showed our respect to them. Our squad are very tired. We are not just tired, some of us are also sick. But we struggled very well in 2014."

Regarding his assist for Sosa's superb goal, Şahan said, "Veli Kavlak pressured the rival player well. He made a good pass to me and since I know Sosa's quality, I passed the ball to him. He then found the net with his terrific right foot."

Gaziantepspor went down at home as well, losing 2-1 to Bursaspor. Muhammet Demir gave the hosts the lead just before half time, but late goals from Fernandao and Fernando Belluschi grabbed the points for Bursaspor. Meanwhile, Kasımpaşa and Sivasspor fought a bore draw.