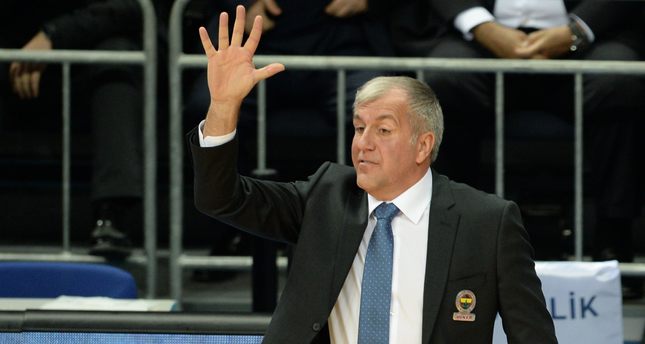 by Daily Sabah Jan 04, 2015 12:00 am
Fenerbahçe coach Zeljko Obradovic blamed his side's poor free throw shooting for their defeat to the unbeaten CSKA Moscow in the EuroLeague on Friday. In the team's first Top16 clash, Fenerbahçe went down 84-81 after overtime against the six-time EuroLeague champions. Defeat in itself is no shame against such a strong opponent, seeing as no side has beaten CSKA Moscow so far this EuroLeague season, but Obradovic saw the game as an opportunity missed after his side missed eight free throws to Moscow's two. "I am really proud of the job of my players and like I just said in the locker room, this is the first game. We have 13 more and we will continue to fight," said the Serb. "It was obvious that we would play overtime after the last possession, and the statistic then was 30 free throws for CSKA - they only missed two - and we had 18 and we missed eight. At this level, this is really very important. We already talked about this. We must change in order to be ready for better executing free throw shooting."

After a tight game in which neither side could claim dominance over the other, Nando De Colo made the difference in the dying seconds of overtime. The former San Antonio Spurs guard made a last-ditch steal and sunk crucial free throws to take the win and continue CSKA Moscow's perfect season.

The game was a meeting of one of the most successful coaching tandems in world basketball. CSKA Moscow coach Dimitris Itoudis was Obradovic's assistant at Panathinaikos, where the two won five EuroLeague titles in a 13-year stint together.

"I think that both teams performed at a high level and gave a great game for the fans here in the gym and all over the world watching on TV," Itoudis said. "Of course, when a game goes like this and goes into overtime, both teams could win. It's one point, one rebound, one steal, one extra pass - everything matters. So, Fenerbahçe could also win and would have deserved it. But I'd like to say congratulations to my team. We have won on the road against a great opponent. In my point of view, it was justified by the action on the court."