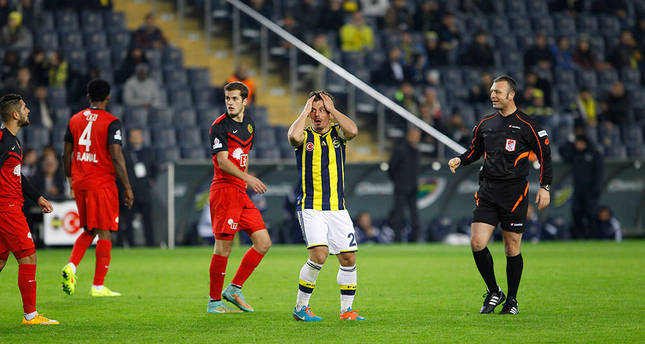 The Turkish Football Federation has taken the revolutionary decision to remove the limit on the number of foreign players a team is allowed. Teams will be able to have 14 foreign and 14 home-grown players in their squad and are allowed to field 11 foreign players

The discussion on limiting foreign footballers, which has been ongoing for years in Turkish football, has entered a new era. The Turkish Football Federation (TFF) and the Association of Football Clubs announced on Monday new rules on the number of foreign football players a team can field, coming into force next season.

The current foreign player ruling states that only five non-Turkish players are permitted to play at any one time and three foreign players are allowed on the bench. But under the new rule a Turkish Super League team will be allowed to take to the field with a team entirely composed of foreign players. Some argue that the removal of the limit on foreign footballers will harm Turkish football. They insist that the national team will suffer as a result of local players finding it impossible to get first team football.

On the other hand, some, including Fenerbahçe's President Aziz Yıldırım, have been standing up for the abolition of the foreign footballer limitation. They argue that Turkish teams will be able to better compete with their European rivals if they are allowed to have limitless foreign footballers. One thing that should be for sure is the lowering of the price for Turkish players, likely helping some of the smaller teams. The move is likely to have a big impact on many of the Turkey's leading teams, who are becoming increasingly multinational and will see the ruling as a chance to load up with foreigners to help compete in international play.

Starting from the 2015-16 season, clubs will only be allowed to have a 28-man squad. Fourteen domestic and 14 foreign players will be permitted. Out of the 14 domestic players, four must have been raised in Turkey and two must have been developed at the club. Out of the 14 foreign players, 11 can be included in the 18-man matchday squad list and all 11 can play at any one time. Players of Turkish origin that play for another national team will not count as domestic players. Seven out of the 18-man matchday squad have to be domestic players and this must include a Turkish goalkeeper.

Furthermore, footballers who prefer to play in foreign national teams will be given foreign player status. However, those who previously play under Turkish footballer status, such as Veli Kavlak and Erkan Zengin, will be excluded from this rule. The football federation will give incentive pay to the clubs whose foreign footballers are included in national teams.

The Turkish Football Federation will contribute toward the fee for each foreign footballer this season. For the 2014-2015 season, the fee is TL 40,000 ($17,170) for the first foreign player followed by TL 60,000 for the second, TL 75,000 for the third and TL 100,000 for the fourth. This season, almost TL 10 million was collected from the clubs and saved in the federation's budget. Next season, the fee rate will be at least doubled. Eighty-five percent of the collected money will be shared among the clubs. Sports clubs will receive different points in terms of the number of players from the junior's group that are included in the team for a match and are selected for the 11-player team. This rule is also valid for the players trained in Turkey.

Additionally, the club will have more points in accordance with the number of players from the junior's group that are included in the national team. Another rule is if a foreign player is added to the national team, then the club will get more points, too. At the end of the next season, the collected money will be distributed among players, according to the club's points.

TFF Chair Yıldırım Demirören has revealed that clubs with debts to UEFA, FIFA or those that have not paid taxes or players 'wages will not be permitted to make foreign transfers as part of the new regulations. He said on the new rule, "All 18 Süper Lig clubs voted in favor of the new measures, it was a joint decision between the federation and union of clubs. Only clubs that have paid their taxes, player wages and that have no debts to UEFA or FIFA will be permitted to make foreign transfers."

Demirören said that the new regulation will be called the "Home-Grown Players Rule", not "Foreign Footballers Rule." "Our biggest goal is to give a chance to the junior footballers. Our real aim is not to encourage foreign footballer transfers but to encourage to raise home-grown players. We talked and negotiated with so many people before taking this important decision. All the club's presidents support us," he added.

Göksel Gümüşdağ, the Chair of the Association of Football Clubs also said, "We have removed the limit on the number of foreign footballers that made us busy for a very long time. I thank Yıldırım Demirören and TFF administration for their dialogue with us for this decision."