Neymar to come to Istanbul for International Royal Cup tournament 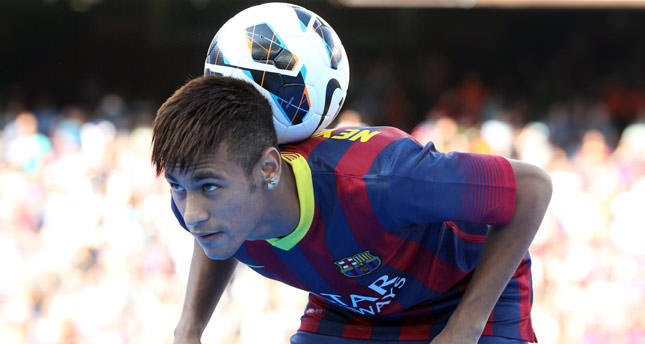 by Daily Sabah Jan 10, 2015 12:00 am
Barcelona star Neymar will take to the field in Istanbul this month in the International Royal Cup, whose schedule was released yesterday. Organized by SportPark, the International Royal Cup 2015 will host footballers from Beşiktaş, Galatasaray and River Plate along with Neymar's team Instituto Projeto Neymar JR from Jan. 16 to Jan. 18 in Alanya. The footballers will come together at Alanya Oba Stadium. Brazilian player Neymar, one of the best players in the world, will come to Istanbul on Jan. 12 and all the details of the organization will be released at the press conference, which will take place at Shangri-La Bosphorus Hotel on Monday. Neymar, who will come to Turkey on a special invitation, will pay private visits around the city after the press conference.

The friendly tournament will be the first of its kind between Beşiktaş, Galatasaray and South American sides. Beşiktaş and Galatasaray are currently tied on 35 points in the Süper Lig, just one point behind league leaders Fenerbahçe. Galatasaray have three South American players, Brazilian duo Felipe Melo and Alex Telles and Uruguayan international Fernando Muslera. Beşiktaş have two South American players, Brazilian Ramon Motta and Colombian Pedro Franco. Neymar came to Istanbul for a friendly match between Brazil and Turkey in November. Brazil defeated Turkey 4-0 as Neymar grabbed a double.