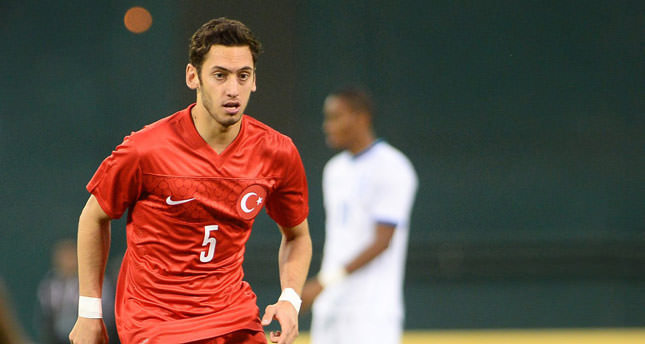 Bayer Leverkusen’s star Turkish midfielder Çalhanoğlu revealed that he will still play for the Turkish national team if the coach calls him up. After an altercation with Gökhan Töre, he was dropped from the national team by Terim

Following the heavy 4-0 defeat against Brazil on November 12 last year, some frustrated Turkish fans held up a picture and a national team shirt bearing the name of the outstanding Bayer Leverkusen schemer Hakan Çalhanoglu. He and his club-mate Ömer Toprak had not been called up for the game.

There was an astounding story behind why the Turkish national team's boss, Fatih Terim, did not call up such an obviously capable player. The story begins back in May 2013, following Turkey's loss against the Nertherlands in their final 2014 World Cup qualifier. Toprak, a friend and Çalhanoglu were at the national team hotel before their flight back to Germany the following morning.

Töre, a former Chelsea youngster who now plays for Beşiktaş, had allegedly been stewing over a reported affair between his former girlfriend and Toprak's friend. He was determined to get revenge even if his team-mates were in the way.

Accompanied by a sidekick, whose identity remains unknown, Töre is alleged to have gained access to Toprak and Çalhanoglu's room after the pair had returned there. According to Çalhanoglu, Töre's friend walked over to Toprak, pulled out a gun from his jacket and told him he would be shot if he didn't lay flat on the floor.

"I was hit and then I was lying in a corner. He then came up to me and said: 'Don't move or I will shoot you. I was curled up in the corner of the room, I couldn't move, I was scared for my life," Çalhaonoğlu said.

The story remained largely forgotten until October's match against Czech Republic, when Terim decided to recall Töre after a year's absence from the setup. Terim also invited Çalhanoglu and Toprak but Leverkusen declared their players ineligible due to injury. This was interpreted in Turkey as a convenient way for the club to keep two of their most valuable players from being in the vicinity of their one-time international team-mate, especially considering both started in the Bundesliga straight after the international break.

Çalhanoglu, who is one of the hottest prospects in European football, recently spoke with German daily Bild. He said that he had no problem with Töre and was ready to play for Turkey's national team again despite what happened in the past.

He also said, "I need to keep up my performances at club level, then my chance in the national team will come back. I just have to be patient."

Terim has been heavily criticised for his decision to drop Bayer duo Çalhanoğlu and Ömer Toprak while calling up Gökhan Töre. The 20-year-old joined Bayer for 14.5 million euros this summer - the highest fee ever paid for a Turkish international. Çalhanoğlu has scored seven direct free-kicks in the Bundesliga in his career despite being just 20-year-old. The Turkish international attacking midfielder is currently the leading top free-kick scorer in Europe's top five leagues.

Underlining his best free-kick was against Cologne, Çalhanoğlu said, "I do not have a special trick for free-kicks. Nothing comes from nothing. And I always practices free kicks. Many, many times ... "