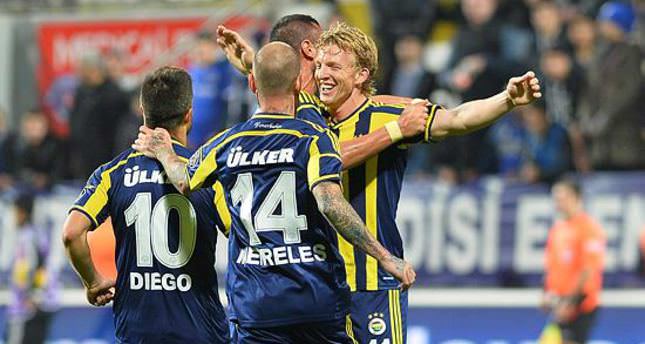 Fenerbahçe extended their lead at the top of the league with a 3-0 victory over their Istanbul rivals Kasımpaşa. The Yellow Canaries inflicted Kasımpaşa’s first home defeat of the season, taking their winning run to six games

League leader Fenerbahçe made a good start for the second half of Turkish Spor Toto Super. The Yellow Canaries cruised past Kasımpaşa 3-0 in the week 17 game on Saturday. Visitor side Fenerbahçe took the lead in the 15th minute at Recep Tayyip Erdoğan Stadium, when 34-year-old Dutch forward Dirk Kuyt fired outside the box and hit the target and Brazilian midfielder Diego Ribas da Cunha making the assist. In the 60th minute, Fenerbahçe's Portuguese midfielder Raul Meireles was subbed out with a suspected injury; nine minutes later, Kuyt doubled the score. Lurking in the box, Kuyt came up with a fierce shot that was enough to find the net. In the last minute of stoppage time, Fener made the score 3-0 after their Turkish attacking left back, Caner Erkin, put the ball in the back of the net while he was free in the area for the final score, which raised Fenerbahçe total league points to 39. The Yellow Canaries are now four points ahead of their closest rival, Beşiktaş. Kasımpaşa slipped down to ninth place following the defeat. Fener have inflicted their rivals' first home defeat of the season, taking their winning run to six games. However, Fenerbahçe was shocked after hearing that Dirk Kuyt said he had injured his right leg.

Fenerbahçe head coach İsmail Kartal held a press conference after the match and said, "I congratulate my players. We wanted to continue from where we left off. We prepared well in terms of tactics and we analyzed the rivals meticulously. My players showed good performance during the game. After Raul Meireless got out the game, I took Alper Potuk from left wing to center field. That's why we had the upper hand. If Emmanuel Emenike continues to play like this, he will be able to score many goals."

Praising his teammate da Cunha, Fenerbahçe forward Pierre Webo said, "He showed his class. I congratulated him after the game. He is trying to be useful to the team, especially in the last three matches. Everybody's proud of his performance. Emenike also did well for the team. I think he will score his wonderful goals again. I'm very happy for the win against such a difficult team like Kasımpaşa. I'm happy for myself too. I'm getting better after the injury I have been suffering with. I hope we'll go on like this."

Additionally, Gaziantepspor scored in the last seconds of the game to secure all three points against a struggling Balıkesirspor. Muhammet Demir's 90+5 minute goal was the difference between to two sides in a game where Balıkesirspor had chances to take the win. The Falcons moved up to seventh place with the victory while Balıkesirspor remain at the foot of the table with 12 points in 17 games.