Atletico issue 10 euro Turan bank notes in honor of him 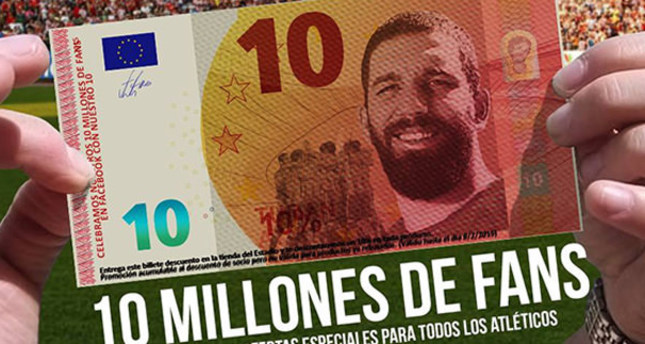 by Daily Sabah Jan 31, 2015 12:00 am
Atletico Madrid have launched an interesting campaign in honor of reaching 10 million subscribers on Facebook. The football club has introduced bills with Arda Turan's picture on it that can be used at a discount. The popularity of Atletico Madrid has increased recently, thanks to their success at home and abroad. Many football lovers from Spain, as well as around the world, follow the official social media pages of the club. Atletico Madrid, which has 1.5 million followers on Twitter and 10 million subscribers on Facebook, decided to introduce a campaign to celebrate their social media success. The club published 10 euro bills featuring the picture of Arda Turan on their official website. In the statement, it is said that Atletico fans can bring these fake 10 euro bills to any shop that sells official Atletico Madrid products and receive a 10 percent discount on their purchases.