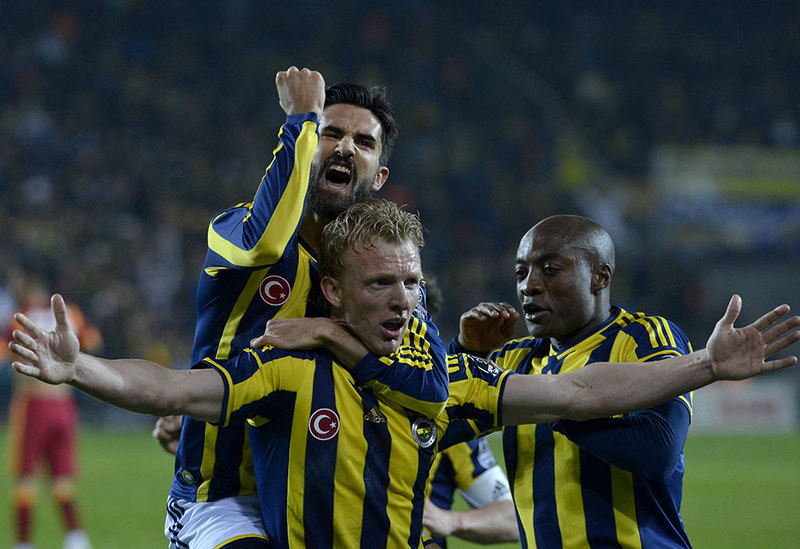 After Fenerbahçe's 1-0 win over city archrivals Galatasaray, the race for the title in the Spor Toto Super League has got even closer. The Yellow Canaries narrowed the gap at the top of the table to just one point, with the Lions continuing to hold onto their top spot

Turkey's Spor Toto Super League title race among the three Istanbul giants, Beşiktaş, Fenerbahçe and Galatasaray, is at full speed. All eyes were on the Fenerbahçe-Galatasaray derby on Sunday night. By toppling their archrivals Galatasaray 1-0, Fenerbahçe managed to continue their eyebrow-raising home unbeaten streak in city derbies. If Fener had lost against Galatasaray, the point deficit between them would have increased to seven points. After the win, Fenerbahçe raised their points total to 50 while Galatasaray remain on 51 points. The Lions also have the league's best goal difference, a potentially crucial decider in such a tightly run championship race. Meanwhile Besiktaş, also title contenders, are in second place with 51 points, behind only on goal difference.

The Yellow Canaries have a big edge over their city rivals, Galatasaray and Beşiktaş, at Fener's Kadıköy-based Şükrü Saraçoğlu Stadium, maintaining an unbeaten streak that is the envy of Istanbul. Fenerbahçe haven't been defeated at the Şükrü Saraçoğlu Stadium by Galatasaray in their last 16 derby matches and Beşiktaş in their last 10 games. The Yellow Canaries have won 13 of their last 16 games against Galatasaray, drawing in three matches. They have won six games of their last 10 games against Beşiktaş, drawing in the other four games. The last time Fenerbahçe lost to Galatasaray at home was in a previous millennium, back in 1999. It's fair to say that Kadıköy has become an unhappy hunting ground for Galatasaray.

The last time Galatasaray beat Fenerbahçe at the Şükrü Saraçoğlu Stadium was on December 22, 1999. Fenerbahçe last lost against Beşiktaş on their own soil back on April 17, 2005. Fenerbahçe didn't just pick up a big win yesterday that carried on their impressive streak, they also narrowed the gap at the top of the table to just one point, with the Lions continuing to hold onto their top spot.

Stressing that they have deserved the win, Fenerbahçe coach İsmail Kartal said, "We played better than our rivals. At the same time we are much better than the other rivals. Those who object to this are malevolent.

"We were leaders two weeks ago. We have always been in the title race. We played against Galatasaray in the first game of the season. But we lost because of a lack of luck. In this match, the side who wanted the win more was Fenerbahçe. I thank my players, who are very honorable and solid people. I thank also our fans who filled the stadium and supported us. My only wish is that the luck will be with us more."

Galatasaray coach Hamza Hamzoğlu said, "Our long ball tactic was a bad idea. We could not execute our game plan on the pitch. Both sides did their best but Fener won. We will move on. We have 11 games ahead of us.

"We preferred a defensive style first because Fener had to win and play aggressively. We could not manage to find the net with long balls. I thank my players anyway."

Fenerbahçe winger Dirk Kuyt, who scored the winning goal against Galatasaray in the Intercontinental derby, said he was happy about scoring the winning goal in a big game, a trait he gained at Feyenoord and Liverpool where he stood out for his goals in city derbies. Kuyt said, "We are happy with this result. We never give up as a team. We desperately needed this win. We fought well as a whole team. We are together in hard times. I hope we will get the title and wear the fourth star."

Meanwhile Galatasaray Chair Duygun Yarsuvat's statements after the match caused controversy among Galatasaray fans. A correspondent asked, "You lost. What will you say." Yarsuvat responded, "The tradition was not broken. No need to sorrow. We are still leaders." These words annoyed Galatasaray fans. Some fans asked on social sites, "Our president taunt his club?"

Elsewhere, Karabükspor and Gaziantepspor played out a goalless draw at the Dr. Necmettin Şeyhoğlu Stadium. The home side remain in the relegation zone following Sunday's result with 18 points in 23 games. Gaziantepspor find themselves in 10th place with 28 games in 23 places.

Başakşehir and Konyaspor shared the points in a 0-0 draw at the Başakşehir Fatih Terim Stadium on Sunday.