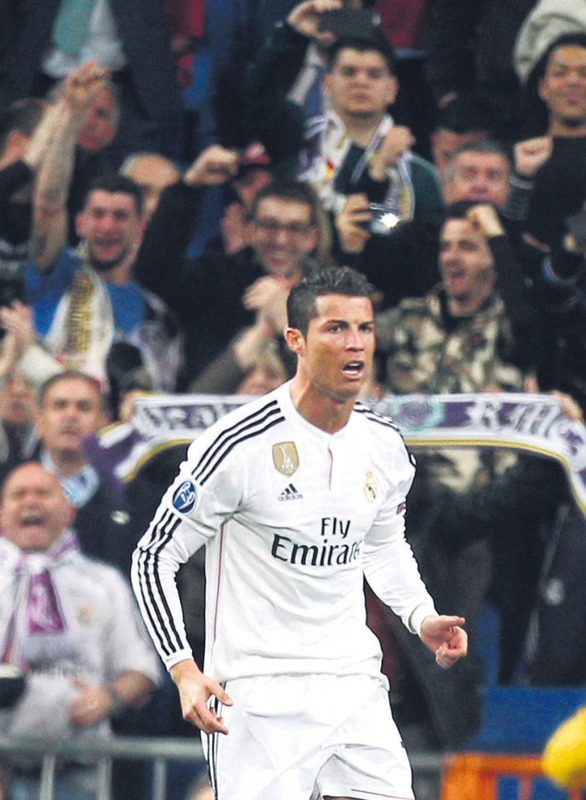 by Mar 12, 2015 12:00 am
Two-goal Cristiano Ronaldo may have become the record scorer in European competition on Tuesday but the Real Madrid forward was left seething by another poor performance from the stuttering European champions. Television cameras captured a grim-looking Ronaldo shaking his head and apparently mouthing "disgrace" to Karim Benzema shortly before the end of Real's 4-3 defeat to Schalke 04 at the Bernabeu, the holders squeaking through to the quarter-finals 5-4 on aggregate. Ronaldo's two first-half headers had helped keep hopes of a record-extending 11th European crown alive and took his tally in European competition to a record 78 goals, surpassing Barcelona forward Lionel Messi (76) and former Real striker Raul (77). However, they were one of the few bright spots in a generally weak showing that came hard on the heels of the 1-0 defeat at Athletic Bilbao at the weekend that cost Real top spot in La Liga. The reverse to Schalke was their first home defeat in the Champions League in 22 matches since April 2011 and the players were whistled off the pitch by the angry home fans, many of whom waved white handkerchiefs in the traditional sign of discontent. Ronaldo gruffly announced to reporters he was not going to speak to the media again until the end of the season, leaving captain and goalkeeper Iker Casillas to try to explain the team's recent slump. "The team has again failed to reach the level of recent months but what's important is that we realise that," the Spain international said. "We have to understand the Madrid fans and today we weren't up to the standards of Real Madrid and the Champions League last 16," he added.