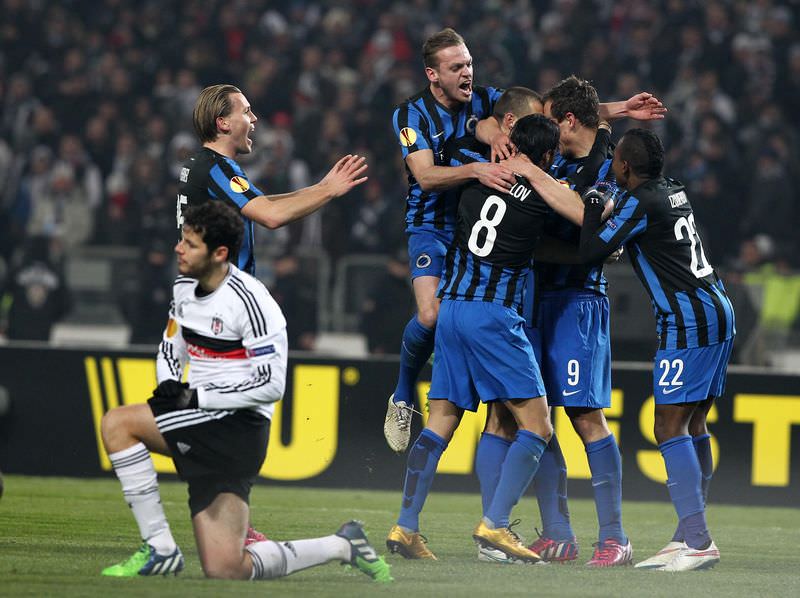 by Anadolu Agency Mar 20, 2015 12:00 am
Belgian club Brugge skipped past Turkish club Beşiktaş 3-1 in the UEFA Europa League Round of 16 second leg in Istanbul and knocked Beşiktaş out of the tournament on Thursday night.

In the 48th minute, Beşiktaş left-back Ramon Motta's thunderbolt from outside the penalty box beat Brugge goalkeeper Matthew Ryan and went in, 1-0.

In the 61st minute, the visitors' Belgian target man Tom de Sutter finished off in a one-on-one position after receiving a through ball, 1-1.

In the 80th minute of the game, the Belgians came back when left-back Boli Bolingoli-Mbombo hit on a breakaway, 2-1.

Near the end of the game, Brugge made it three after Bolingoli-Mbombo finished in the box after taking advantage of Beşiktaş player Necip Uysal's mistake, 3-1.

During injury time, Besiktas midfielder Olcay Şahan was directly sent off after a harsh tackle against Obbi Oulare.

Winning the round 5-2 on aggregate, Brugge advanced to the quarter finals in the Europa League and Beşiktaş were eliminated from the tournament.
Last Update: Mar 20, 2015 9:56 am
RELATED TOPICS