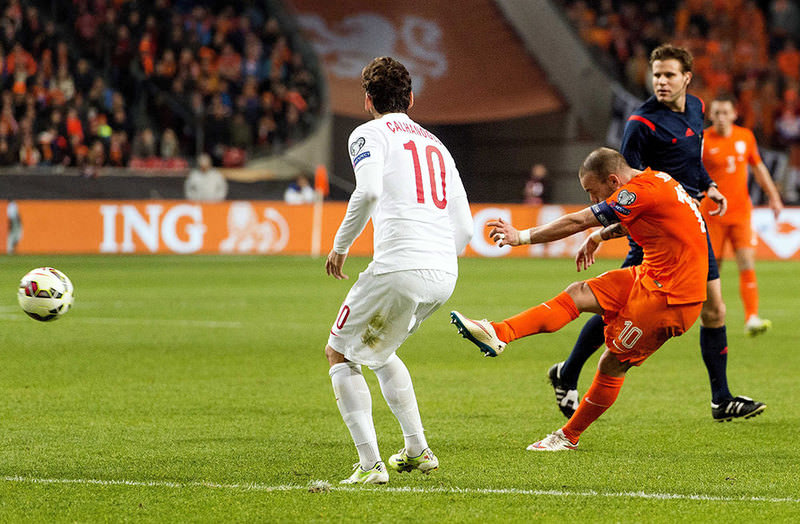 by Daily Sabah with Agencies Mar 29, 2015 12:00 am
Wesley Sneijder grabbed an injury-time equalizer for the Netherlands to draw 1-1 against Turkey on Saturday and keep alive its hope of qualifying for next year's European Championship.

Sneijder's deflected shot two minutes into extra time cancelled out a 37th-minute strike by his Galatasaray teammate Burak Yılmaz that looked like winning the match at Amsterdam Arena.

Missing star forwards Robin van Persie and Arjen Robben and center back Ron Vlaar, the Netherlands looked toothless in attack and fragile in defense throughout the match.

Elsewhere, the Czech Republic grabbed a 90th-minute equalizer to salvage a 1-1 draw against Latvia to stay atop Group A, while Iceland beat Kazakhstan 3-0 to stay second.

Turkey played away at European heavyweights the Netherlands in Amsterdam on Saturday.

The Oranges were without two of their star players, Bayern Munich's explosive winger Arjen Robben and Manchester United striker Robin van Persie, who were not playing due to injuries. Robben, who has only recently returned from a back injury, was taken off after just 24 minutes in the shock 2-0 defeat to Borussia Moenchengladbach last Sunday following a tackle by Tony Jantschke.

In the meantime, Turkey's ace in the midfield, Arda Turan, missed the critical game in Amsterdam due to a suspension.

Turkey and the Netherlands met twice in the 2014 FIFA World Cup qualifying round, with the Oranges winning both games 2-0. The Netherlands will make their 10th FIFA World Cup finals appearance this summer and will be aiming to reach the same number of UEFA European Championship final tournaments in France. Widely renowned for the inventive quality of their football, they became champions of Europe in 1988 when Rinus Michels' talented team, including classy forwards Ruud Gullit and Marco van Basten, lifted the Henri Delaunay Cup in Munich. Turkey have also dramatically beaten one of their group rivals 3-2 having been two down to reach a UEFA EURO quarter-final, the Czech Republic in 2008, when they made the last four. It took Turkey 10 attempts to qualify for their first UEFA European Championship final tournament, and after losing all three matches at EURO '96 they reached the quarter-finals at UEFA EURO 2000 under Mustafa Denizli.

Turkey will be hosted by Kazakhstan on June 12. The Netherlands will face Latvia in an away match on the same day. Turkey will host the Netherland on September 6. The Turkish team will also be challenged by Latvia, the Czech Republic and Iceland. It was the 11th international game played between both sides. Turkey played the Netherlands for the first time in 1958 in a friendly game and won 2-1.
Last Update: Mar 29, 2015 3:12 pm
RELATED TOPICS