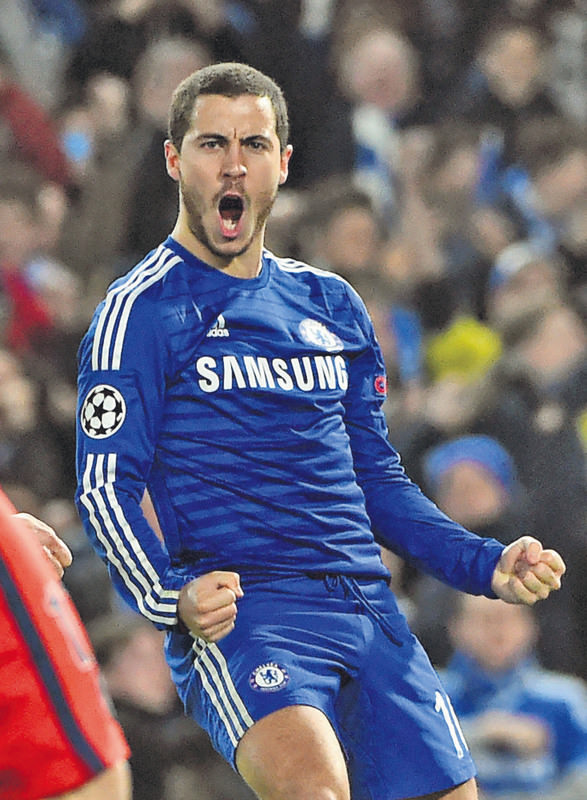 by daily sabah Apr 04, 2015 12:00 am
Eden Hazard has taken on the challenge of picking his dream five-a-side team, but his selection has created something of a stir, according to ESPN. A high profile midfielder who was sold by Chelsea last year and another who struggled to make his mark in the Premier League at Arsenal are included in the Belgian's list, with Blues legend Didier Drogba a standout name to lead his forward line. "I have a lot of respect for Didier," Hazard said. "I saw a lot of his games before I came to Chelsea and he was one of the top players. It's a pleasure to be his teammate now." His choice of an extra striker in his overly attack minded lineup will surprise many, with Demba Ba picked a few months after he was ushered out of the Stamford Bridge door by Chelsea boss Jose Mourinho. "My best friend," is how Hazard justifies picking Ba. "And not because I played with him, because I didn't really get the chance. He was on the bench a lot and then when he started to play, I was injured." His choice of Juan Mata may be seen as controversial, with Mourinho opting to offload the Spaniard to Manchester United in January 2013. "From the first training session we were together, our understanding was very good and we had a good relationship," Hazard said of Mata, as he also included Gervinho in his lineup, after suggesting he enjoyed playing alongside the Ivory Coast star in his time at Lille. Goalkeeper Thibaut Courtois was the only defensive player on his team, with Hazard suggesting his compatriot is a one-man defense on his own, stating: "I know I don't have any defenders on my team, but when do you think the opponent will get the ball? They are not getting the ball, but even if they do, I have Thibaut there to stop them."
Last Update: Apr 04, 2015 1:50 am
RELATED TOPICS