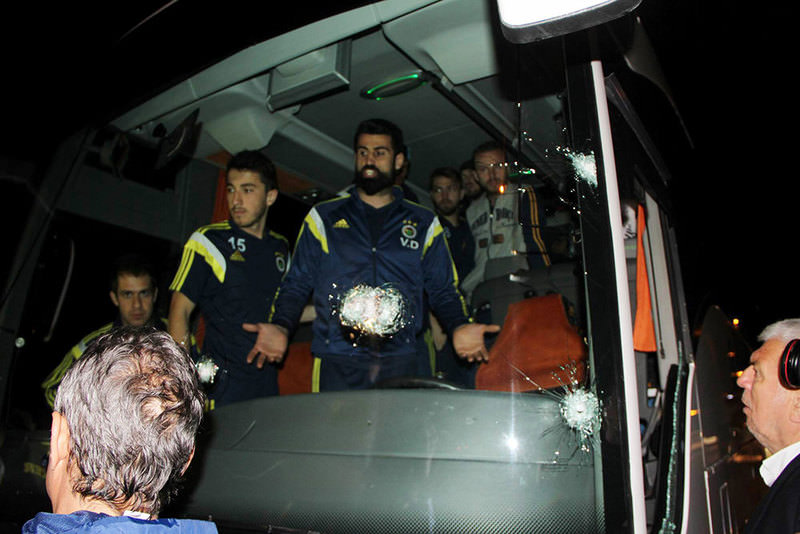 The attack on Fenerbahçe's team bus has been widely condemned in Turkey, and the Yellow Canaries have demanded the suspension of the national league championship. Fenerbahçe's Turkish Cup match tomorrow was postponed as a result

The Turkish football world has been left shocked by a preposterous, violent attack late on Saturday. An unknown gunman or gunmen opened fire on the bus of the Fenerbahçe football club in Turkey, causing injuries to the driver, although all the players were reported to be safe. The incident took place in the northeastern city of Trabzon after Fenerbahçe won 5-1 over nearby Çaykur Rizespor.

Several shots were aimed at the bus as it passed through Trabzon on the way back to Istanbul, said the club's vice president Mahmut Uslu, who was on the bus at the time. He accused the attackers of trying to "crash the bus and kill all the players. It's unbelievable," he told NTV. None of the players were injured in the attack, but pictures of the bus showed a damaged windshield on the driver's side. Fenerbahçe TV maintained that the bus was attacked by an assailant with a shotgun. It said security officers on board quickly took control of the bus and safely stopped it after the driver was hit, averting an accident.

A doctor said on Sunday that the driver had suffered a gunshot to his face. "The bullet entry wound is on the left side of the driver's face, while tomography showed a piece of metal under the bone," Karadeniz Technical University Farabi Hospital Chief Doctor Tevfik Özlü said. Özlü added that the driver's condition was stable and his vital signs remained normal.

Trabzon governor Abdülcelil Öz confirmed Özlü's statement and said the driver's life was not in danger. "At first, we thought stones had been thrown at the bus. But police investigators at the scene concluded it was an armed attack," he told the television station 360. Öz told Anadolu Agency that the driver was most likely hit by a bullet from a shotgun. He added that a thorough investigation would be launched into the incident. The governor said he received a phone call from President Recep Tayyip Erdoğan, a supporter of the Istanbul club, asking him about the investigation into the attack.

The players and their entourage were later met by hundreds of supporters in the club's blue-and-yellow strip at Istanbul's Sabiha Gökçen airport, along with Fenerbahçe's president, Aziz Yıldırım, images broadcast on a Turkish news channels showed.

In response, Fenerbahçe called on Sunday for the suspension of the national league championship. "We consider that as long as this attack is not solved in a way that satisfies Fenerbahçe and public opinion, a suspension of the championship is inevitable," the Istanbul club said on its website. "Blood ran and football was silenced. Finding and punishing the culprits is of vital importance for Fenerbahçe." This led the Turkish Football Federation (TFF) on Sunday to postpone the match, which would have been played tomorrow between Fenerbahçe and Mersin İdmanyurdu in the Ziraat Turkish Cup. The club's home game against Bursaspor, which was due to be played on April 13, was also postponed.

The assault against Fenerbahçe's bus has been widely condemned, including by Erdoğan, Prime Minister Ahmet Davutoğlu, Sports Minister Çağatay Kılıç, main opposition leader Kemal Kılıçdaroğlu, the TFF and several Sport Toto Super League clubs. The clubs included Beşiktaş, Bursaspor, Galatasaray, Gaziantespor, Mersin İdmanyurdu, Trabzonspor and Çaykur Rizespor. Davutoğlu reaffirmed that an investigation was under way, and Kılıç described the attack as "cowardly and barbaric," but said the championship would go ahead as planned. The TFF issued a statement condemning the incident "in the strongest possible terms," and called for the perpetrators to be brought to justice. Foreign Affairs Minister Mevlüt Çavuşoğlu also condemned the attack on Twitter late on Saturday.

A strong rivalry has developed between Fenerbahçe and Trabzon's local team, Trabzonspor, since 2011, especially after the match-fixing case against Fenerbahçe. In 2011, Fenerbahçe was implicated in a match-fixing scandal that led to the team being sanctioned by the UEFA, including a ban on participating in the next Champions' League season. Additionally, the Trabzonspor administration and fans feel they should have won the Turkish cup, but Fenerbahçe has retained the title so far. Trabzonspor Chairman İbrahim Hacıosmanoğlu has been alleging that Fenerbahçe's 2011 title should have been won by Trabzonspor, who finished second that season.

Trabzonspor Vice President and Speaker Yakup Aslan said in a statement, "This is an attack aimed at disrupting our unity. We will do our best for the culprits to be identified and apprehended."