Erdoğan: No compromise on fair play 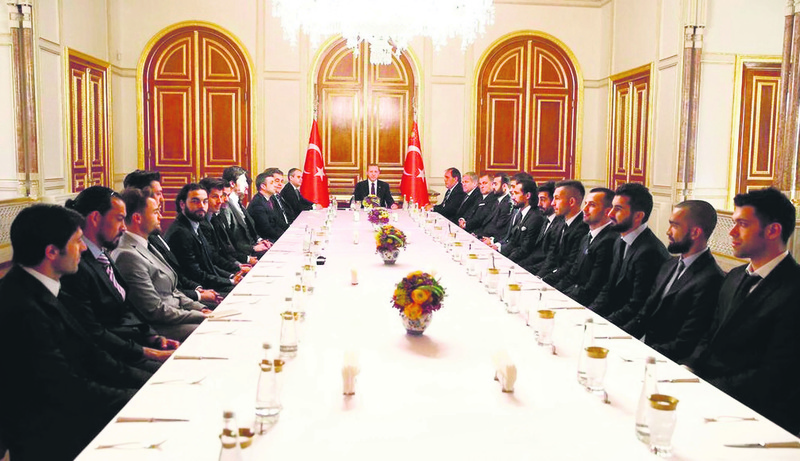 President Erdoğan held a meeting with the captains of all of Turkey's top flight football clubs on Sunday over the situation in the league a week after the gun attack on the Fenerbahçe team bus. While the players called for fair play rules that must be put into action, Erdoğan called for them to not compromise on fair play

The Turkish football community was shocked by an armed attack on the Fenerbahçe team bus as it was traveling on the Rize-Trabzon highway near the Arsin district of the eastern Black Sea coast of Turkey on April 4. On Sunday, President Erdoğan received President of the Turkish Football Federation Yıldırım Demirören, Chairman of the Turkish Union of Clubs Göksel Gümüşdağ, Technical Director of the Turkish national team Fatih Terim and Super League team captains at the Mabeyn Mansion. Erdoğan hosted all 18 captains from the Super League including Emre Belözoğlu of Fenerbahçe and Selçuk İnan of Istanbul rivals Galatasaray at the Ottoman-era Yıldız Palace in Istanbul, the presidency said in a statement.

Erdoğan made no comment after the meeting, which was closed to the media. According to Anadolu Agency, the meeting carried the message of struggling against violent attacks in full unity and solidarity, presidential sources said. The meeting was held in a relaxed atmosphere and every participant expressed their opinions freely, sources said. The meeting was conducted to give a united message to the public. Following the opening speech, President Erdoğan listened to each official and team captain. The participants stressed that the attack caused "sadness." They emphasized that the struggle against violence both on and off the pitch is of huge importance.

The team captains said that fair play rules must immediately be put into effect, underlining that everyone from club administrators to politicians, and media staff to players, must show awareness and responsibility over the issue. Participating in the meeting with his translator, Trabzonspor team captain, Jose Bosingwa thanked President Erdoğan for giving them an opportunity to express themselves. He said, "What is important for us, the footballers, to give constructive contributions with our behavior both on and off the pitch."

According to presidential sources, President Erdoğan also said that the Prevention of Violence and Disorder in Sports ("Law 6222") was enacted during his prime ministry. Erdoğan stressed that the law must be put in action and the possible deficiencies must be determined with new regulations.

Youth and Sport Minister Kılıç said they had been in consultation with the TFF and the clubs over the issue. Turkey's national team coach Terim said that better results could be obtained if the regulations on preventing violence could be both feasible and deterrent.

President Erdoğan is said to have told the players not to be affected by "outer factors" and not to compromise on fair play. Erdoğan also invited the guests to the Huber Mansion at the end of the season. Erdoğan saw all the guests off one by one and presented ties in memory of the meeting.

The Fenerbahçe team bus was fired on last weekend in the Black Sea region, prompting the Turkish Super Lig to be suspended for one week. Fenerbahçe have said they will not play again until the attack is cleared up and it is not clear when games will resume. Two men were arrested over that attack, but were released on Wednesday.

However Belözoğlu said Erdoğan had said he hoped such meetings be continued in the future. "We need to set examples to our supporters off the pitch as well," said Belözoğlu. On Fenerbahçe, he said: "Our team's morale is good. After coming through a tough period we think there are going to be good things for ourselves and Turkish football."