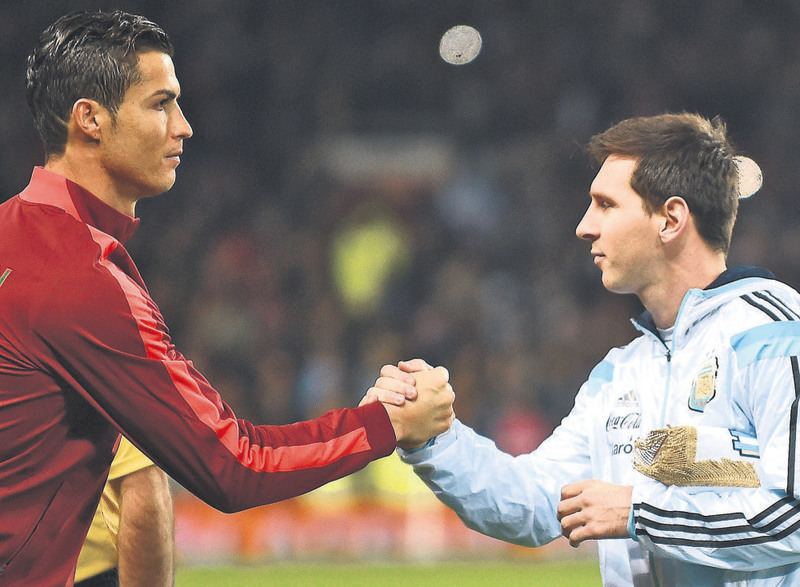 by daily sabah Apr 14, 2015 12:00 am
Spanish newspaper El Mundo Deportivo reported yesterday that UEFA is planning to organize an event similar to the NBA's All Star Game, which could see Lionel Messi and Christiano Ronaldo wear the same jersey for the first time. According to the Spanish daily, the organization will be international and the footballers will be chosen from northern and southern European leagues. The players will be picked by a vote on the internet. According to the story, UEFA has been consulting European clubs about the potential game. El Mundo led with the suggestion that Lionel Messi and Cristiano Ronaldo could play together on the same team, an event that has never taken place before. They would compete for "Team South" in a UEFA All Star Game currently being considered by European football's governing body.A multinational marketing company has approached UEFA with an idea to run an All Star Game of European-based players, along the lines of the annual NBA All Star Game.

The two teams would be picked by an online vote with no more than three players from any club side. In the NBA, the All Star Game is between the Eastern and Western conferences, that already exist. The UEFA All Star Game would be between leagues from northern Europe, e.g. English Premier League, Bundesliga and Russia Premier League, and southern Europe, e.g. La Liga, Ligue 1 and Serie A. As a result, Messi and Ronaldo could play together for the "South" team. This would almost certainly guarantee an audience of millions across the globe.

El Mundo Deportivo suggests that the earliest the project could get off the ground is 2017 and the idea has already been presented to some of the biggest clubs in Europe, including Barcelona. Finally, El Mundo added that UEFA has not yet approved the project but they suggest President Michel Platini may well be keen to run such a game.