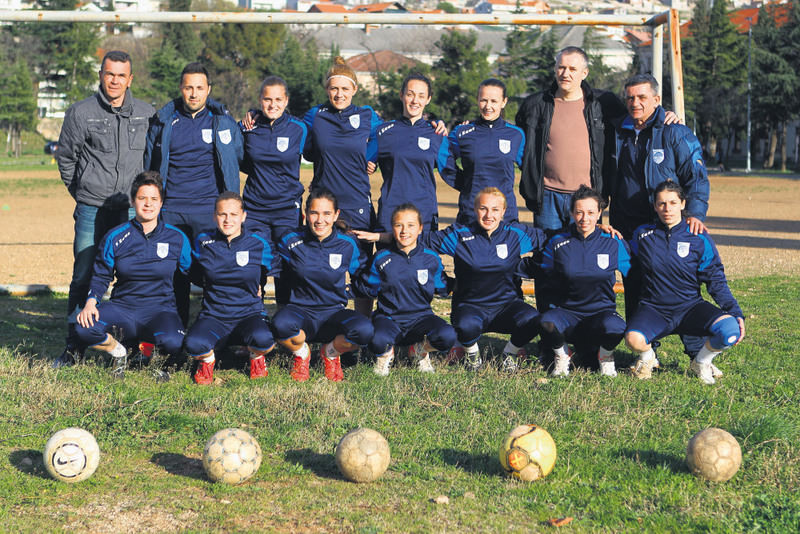 by Anadolu Agency Apr 16, 2015 12:00 am
Bosnia witnessed one of the cruelest wars in recent history. It was an international armed conflict that took place in Bosnia and Herzegovina between April 6, 1992 and Dec. 14, 1995. Although some tension has continued to linger since then, female footballers in the country recently made a profound step toward peace and humanity. The Mostar Female Footballers Club, in which Bosnian, Croatian, Japanese and Dutch players play together on the same team, have set an example for peace between the region's ethnically divided people.

The city has been divided by invisible lines following the war. The club is the biggest proof that the myriad of people living there can live together in peace. The team has united the two sides of the city, just like the famous Mostar bridge has done for centuries. The team is supported by both Bosnians and Croatians.

It was founded in Jan. 15, 2012 and is seen as an example of living together with mutual respect and tolerance.

The club president Izudin Tanoviç said in an interview with Anatolian Agency that they turned their back on the "ugly war" in the past and looked to the future with hope. He said, "Mostar Female Football Club is the biggest reason for our hope. Ours is another story. I mean it is a good story."

Stressing that the footballers have only goal, Tanoviç said, "It is to play sports, football. They love football very much. This is the victory."

Tanoviç emphasized that the two biggest clubs in the city, Velez and Zrinski's fans support them. He said, "They hosted us in their stadiums in the last Mostar derby and gave a standing ovation."

One of the footballers, Emiliya Mustapiç said she is proud of being a part of this team, saying, "Our city supports us. There is no obstacle for us."

Merima Tanoviç, one of the four Mostarian footballers in the team, also represents the national team. She said, "We are a unique team. We gathered all the Herzegovina region. We united this city. The people from different cities work for this team. Our biggest goal is to be good sports people and students. We are trying to be an example for the young people in this city."

Currently, the team is struggling to advance to the Premier League. The team's 37-year old Japanese player Juriko Masamoto started her football career in her native country. She has been working at a tourism agency in Mostar and recently has become a member of the team. Moreover, Dutch player Ruby Ellen Todd is studying at a private college in Mostar and one of the junior footballers of the team.

Member of the board, Ante Andriçiç, is preparing to run for the presidency soon. He stressed that their biggest goal is to advance to the Premier League. "We are currently ranked second in our league. I believe we could get very good results by working hard," he said.

The Vice President İvan Mikuliç also pointed out that the club brought peace not only to Mostar but also the entire Herzegovina region. He said, "This a beautiful tale. A tale to be continued."

The club is struggling with financial problems like most of the clubs in the region are. However, they are trying to help people in need. Mostar Female Football Club will play a friendly game in May and donate all the revenue to handicapped children.
Last Update: Apr 16, 2015 11:02 pm
RELATED TOPICS