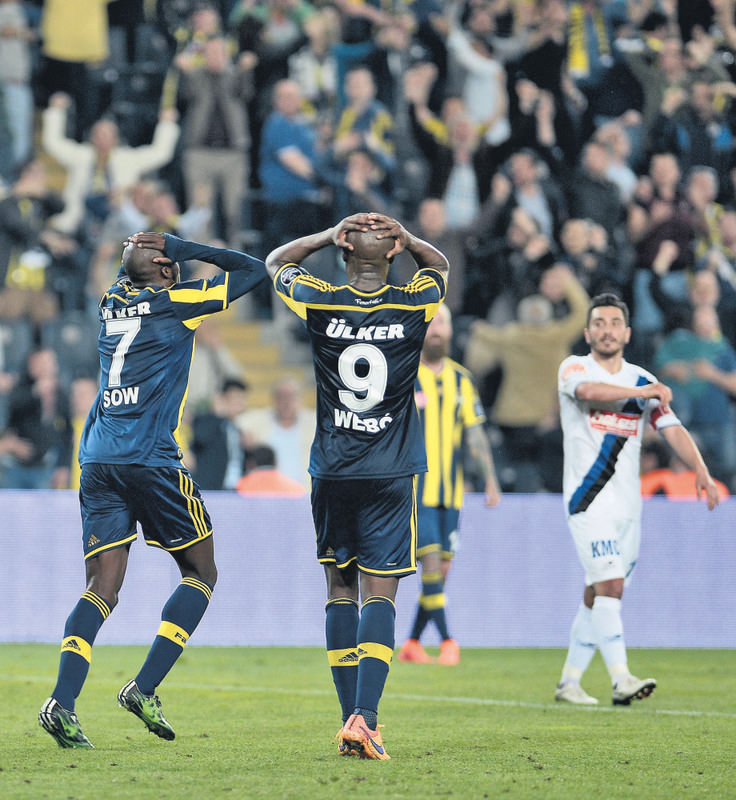 by Daily Sabah May 14, 2015 12:00 am
Fenerbahçe drew 1-1 against SAI Kayseri Erciyesspor on Wednesday night as they failed to close the gap with leaders Galatasary, gaining just one point in the Spor Toto Süper League with only three games left. The game at the Şükrü Saraçoğlu Stadium in Istanbul saw Fenerbahçe take an early lead through center-back Egemen Korkmaz in the second minute. Kayseri's Cameroonian striker Jacques Zoua scored the equaliser just four minutes later. With three games remaining, Fenerbahçe are in second place on 67 points while Galatasaray have 70 points.

Following the match, Fenerbahçe fans became frustrated after they expected to claim an easy win, a reasonable expectation considering the game was played at home against SAI Kayseri Erciyesspor, who are in the relegation zone. But SAI Kayseri Erciyesspor resisted their powerful and ambitious rivals, neutralizing Fener's strikers. Fans in the stands booed the players and club administrators, especially President Aziz Yıldırım with the fans calling on Yıldırım to resign. Fener's training facilities in Samandıra was the scene of a public outcry. Fener's midfielder Diego Ribas said, "It's completely our fault. But our penalty shout, in which I was fouled, was definitely a penalty. We should have been awarded penalty. I'm very sorry for the result." Meanwhile Fenerbahçe Coach İsmail Kartal denied allegations about Yıldırım entering the locker room at half time and slamming the team.
Last Update: May 14, 2015 10:23 pm
RELATED TOPICS