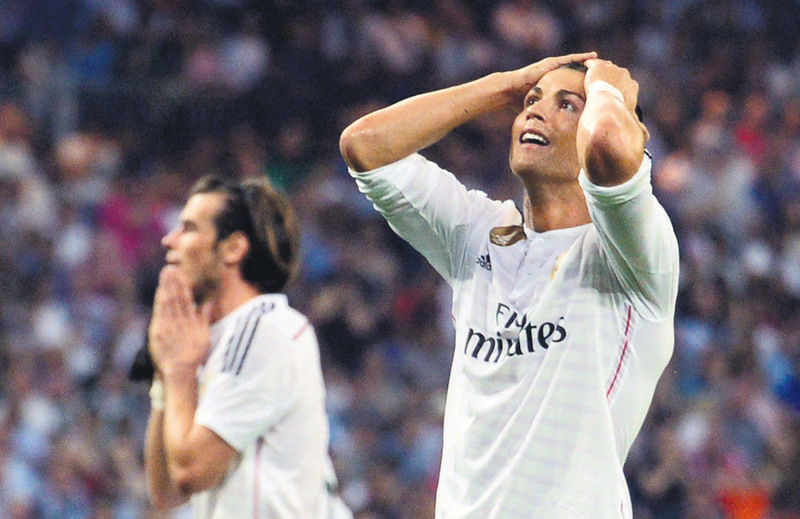 by May 14, 2015 12:00 am
Real Madrid paid more than 200 million euros ($227.76 million) to assemble their forward line of Cristiano Ronaldo, Gareth Bale and Karim Benzema but the attacking trio failed them again in Wednesday's Champions League exit to Juventus. Ronaldo did manage to score from the penalty spot to give holders Real a 23rd-minute lead in the semi-final, second leg at the Bernabeu but faded out of the match in the second half, while Benzema and especially Bale missed a string of chances. It was left to a Real reject to make the decisive contribution, their former striker Alvaro Morata, who joined Juve for 20 million euros in the close season, netting in the 57th minute to send the Italians through 3-2 on aggregate to face Barcelona in next month's final.

Morata's goal ended Real's dream of a record-extending 11th European crown and they are almost certain to end the season without winning one of the three major trophies. Dumped out of the King's Cup by Atletico Madrid in January, they are four points behind La Liga leaders Barca with two games left and the Catalans can make sure of a fifth title in seven years with a win at Atletico on Sunday.

After a successful first season in Spain following his record move from Tottenham Hotspur, Bale has been under scrutiny amid Real's recent struggles, with many fans blaming him for the club's woes. He won applause for testing Juve goalkeeper Gianluigi Buffon with a powerful long-range effort in the first half on Wednesday but later fluffed at least two opportunities, including a header from Ronaldo's lofted cross that he put over the crossbar.

"I couldn't quite get over the ball which was disappointing but it's one of them things that happens in football and you move on," Bale told Sky Sports. "What don't kill you makes you stronger and I'll learn from this season a lot and take it into next season and have a good season."