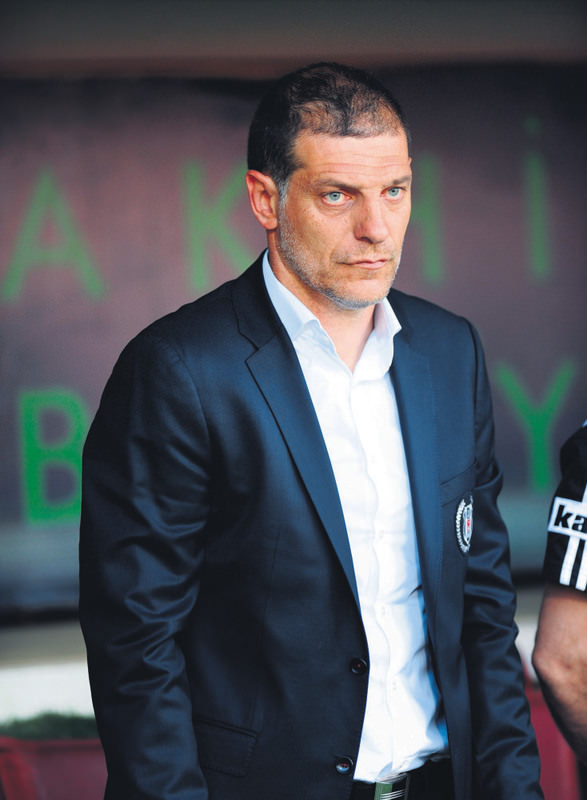 by Hakan Baş May 15, 2015 12:00 am
Beşiktaş drew 1-1 against Akhisar Belediyespor in the Spor Toto Super League at the Manisa 19 Mayıs Stadium on Thursday putting Galatasaray in the driving seat in the league's title race.

Home team Akhisar Belediyespor scored the opening goal in the 14th minute when Mehmet Akyüz headed into make the score 1-0. Visitors Beşiktaş scored the equalizer with Demba Ba's header in the 54th minute with Argentine midfielder Jose Sosa producing the assist. Beşiktaş scored late on but their goal was disallowed because Cenk Tosun was in an offside position. Later, Beşiktaş turned up the pressure in a bid to grab the winning goal, but the match ended in a 1-1 draw. Leaders Galatasaray have 70 points. Fenerbahçe are in the second spot with 67 points and Beşiktaş come in third with 66 points with three games to spare. Beşiktaş coach Slaven Bilic said: "We have been heavily wounded in our search for the championship. And now Galatasaray hold the aces.

"It's been a big disappointment but a fair result. We could not play well enough to deserve the three points. Akhisar deserved one point. We made a good start and were driving the game well. But we could not bear the psychological strain. I told my players at the half that they must be calm and we had enough time to score and win. So we found the net in the second half and had 30 minutes time to score the winning goal. But unfortunately we could not overcome our anxiety and play well. We still have a chance to get the title. However I must admit that Galatasaray have the aces now. We are in a very bad situation. We must hope to win, and pray for Galatasaray to lose their matches.

On whether he was also nervous like the player, Bilic said: "I don't want to say this by including myself. I did my best. But my players were not ready enough and were nervous."
Last Update: May 15, 2015 10:13 pm
RELATED TOPICS