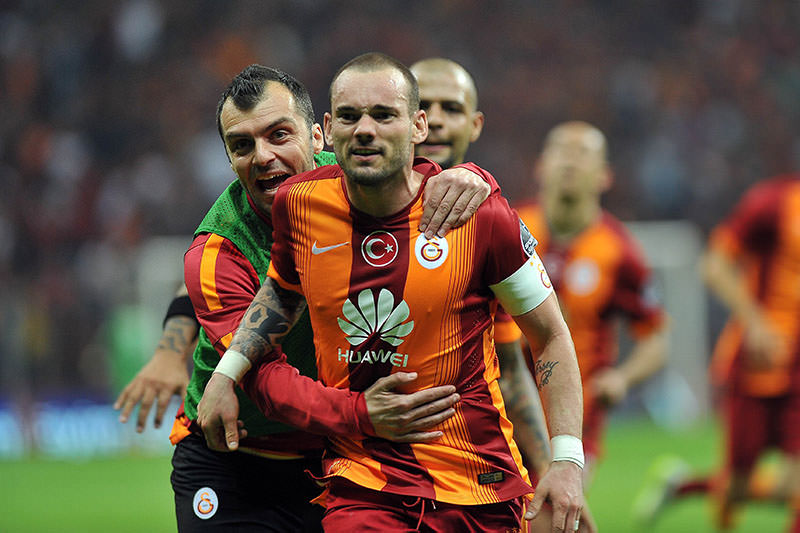 | IHA Photo
by Hakan Baş May 17, 2015 12:00 am
Galatasaray gained a significant advantage in the title race of by narrowly beating Gençlerbirliği 1-0 on Saturday. Now four points in their remaining two matches will be enough for Galatasaray to make their dreams come true. Galatasaray's Dutch star Wesley Sneijder saved his team in his 100th match for the club by finding the net in the 67th minute. His team-mate Burak Yılmaz made the assist.

After the goal, Galatasaray adopted a defensive playing style to help secure the win on their home ground, the Türk Telekom Arena. Additionally, Istanbul heavyweights Galatasaray have not conceded a goal in their last five league matches. The Lions won three crucial points before the derby against Beşiktaş, scheduled on May 24 at Türk Telekom Arena.

Galatasaray Coach Hamza Hamzaoğlu told Lig TV that it was a good and fast game. He said, "We knew that we might find the net late. Our rivals were very good and played very well. As a result my players wanted to win tremendously and they did. Injuries have hit us heavily but may God bless Hamit Altıntop. He made big sacrifices. So did Sneijder and Felipe Melo. Championships take sacrifice. I thank all of them."

A championship is always a good thing and the goal for any big team but this season has extraordinary importance for Galatasaray and Fenerbahçe because they both have 19 championships each. With stars being handed out for every five titles won, both sides are desperate to add a fourth star to their iconic jerseys. Currently they both have three stars on their jersey and at the moment Galatasaray have a better chance grab a fourth.
Last Update: May 18, 2015 12:21 pm
RELATED TOPICS