Club hands out bread as bonus after championship win 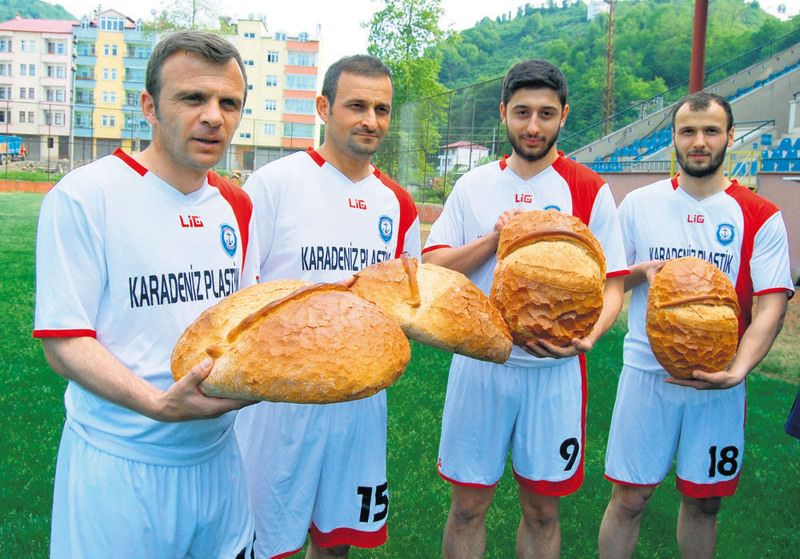 by Anadolu Agency May 22, 2015 12:00 am
An amateur league club in the northern Turkish city of Trabzon surprised its players by awarding them bread as a bonus for winning a championship title.

Vakfıkebir Büyükliman Belediyespor in the city's Vakfıkebir district wrapped up the second half of the season as champions and secured a spot in the Super Amateur League. The club management came up with an ingenious way to reward its players for the victory and, along with an undisclosed amount of money, every player was handed a bread peculiar to the town. Vakfıkebir is nationally famous for its bread with large and round loaves.Players were surprised but pleased, joking that now they have become breadwinners. The club already voiced plans to deliver butter, another foodstuff Vakfıkebir is famous for, if the team wins next season's championship.

Muhammet Balta, mayor of Vakfıkebir, personally delivered the loaves to the players. "We remind them that they can be breadwinners by playing football. Moreover, we promote our famous bread," he said.

The club president Hasan Bahadır said the bread was a symbolic gesture that none of the players expected. "They never played for money throughout the season and they only strived for the championship. In the end, they won," he said.

Uğurcan Kurt, the team's forward, said their efforts were simply to bring more accomplishments to the team. "We would play if they gave us only a piece of bread," he added.
Last Update: May 22, 2015 9:30 pm
RELATED TOPICS