The Lions win the ‘Star Wars’ 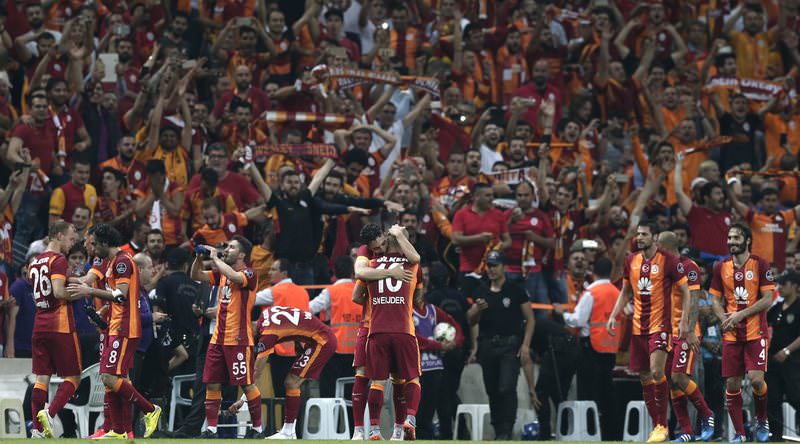 Galatasaray have won their 20th league title becoming the first Turkish side to reach the landmark. The Lions will now be the first team in Turkish football history to wear four stars on their jerseys

The Spor Toto Super League, which was established in 1959, witnessed a historic evening Monday night. Fenerbahçe's 2-2 draw at Başakşehir handed the league title to Galatasaray, giving Cimbom their 20th title and the precious fourth star. This season carried extraordinary importance for Galatasaray and Fenerbahçe because both teams had 19 championships each going into the season, with each club desperate to be the first to pin the fourth star on their jerseys.

Galatasaray fans took to the streets of Istanbul Monday night in droves to celebrate their victory in the "Star Wars." With one round of games remaining, Fenerbahçe needed nothing less than a win against Başakşehir to keep any title hopes alive, but two goals from Mehmet Batdal within 10 minutes in the second half were a hammer blow to Fenerbahce's lingering hopes.

Diego struck back for Fenerbahçe after 80 minutes and Pierre Webo of Cameroon added another after 88 minutes, leading to frantic closing minutes as Fenerbahçe looked for a winner. With tempers fraying, four Fenerbahçe players were sent off in the last 10 minutes - Mehmet Topuz, Bruno Alves of Portugal, Caner Erkin and Pierre Webo - leaving the visitors with just seven players on the field. The total is a first in Fenerbahçe's history. The result leaves Galatasaray with an unassailable five-point lead at the top of the table and as well as earning Turkey's automatic Champions League spot for next season.

Fenerbahçe will finish second and the third Istanbul giant, Beşiktaş, in third place irrespective of the results in next Sunday's matches. Galatasaray's victory means the club has now won a record 20 titles, one more than last year's champions Fenerbahce with 19. There is also a great financial reward that awaits Galatasaray in the lucrative Champions League. Galatasaray will directly participate in the UEFA Champions League, while runners-up Fenerbahçe will play in the qualification rounds.

The Turkish powerhouse will now possibly face easier rivals because they have been seeded. Galatasaray are guaranteed 12 million euros automatically for joining the Champions League. If they make it to quarter finals, a total of 32 million euros money awaits them. In customary fashion, Galatasaray fans celebrated the victory by letting off fireworks, setting fire to torches and honking their car horns in Istanbul from the moment the final whistle was blown. The victory is also a personal triumph for Galatasaray's coach Hamza Hamzaoglu, who was only appointed to the job in late November after the club made a woeful start to the season under Italian Cesare Prandelli.

In recognition of their achievement, President Recep Tayyip Erdoğan sent a congratulatory telegram to the club, the presidency announced. Also, Prime Minister Ahmet Davutoğlu congratulated the Lions' victory on Twitter. Chelsea star Didier Drogba congratulated the "lion hearted fans" of his former team. "I congratulate the lion hearted fans and lion hearted friends of mine", Drogba said in a Twitter post Monday night after the Lions declared their championship. Mallorca's Spanish midfielder Albert Riera and Inter manager Roberto Mancini also hailed their former club's success. The loss is a bitter blow to Fenerbahce and in particular its ex-Liverpool Dutch star Dirk Kuyt in his final season at the club before heading back to the Netherlands. Fenerbahçe manager İsmail Kartal was downcast after the game, declining to answer questions and giving only a brief and enigmatic statement.

"All of us know - the managers and the footballers - how we played this season," he said. "I leave to the conscience of everyone how we have played," he added. Galatasaray had moved close to the title on Sunday with a 2-0 win over Beşiktaş, which was crowned by a brilliant strike from Dutchman Wesley Sneijder, its outstanding player in the last few matches. That win was also the final blow for Beşiktaş's Croatian coach Slaven Bilic, who confirmed he would leave the club. He has been persistently linked with a move to English Premiership side West Ham.

Galatasaray meanwhile will be hoping for to improve their performance in Europe in 2015/2016 after a dire showing in the Champions League this season where they amassed a solitary point in Group D.