Galatasaray and Fenerbahçe in Champions League 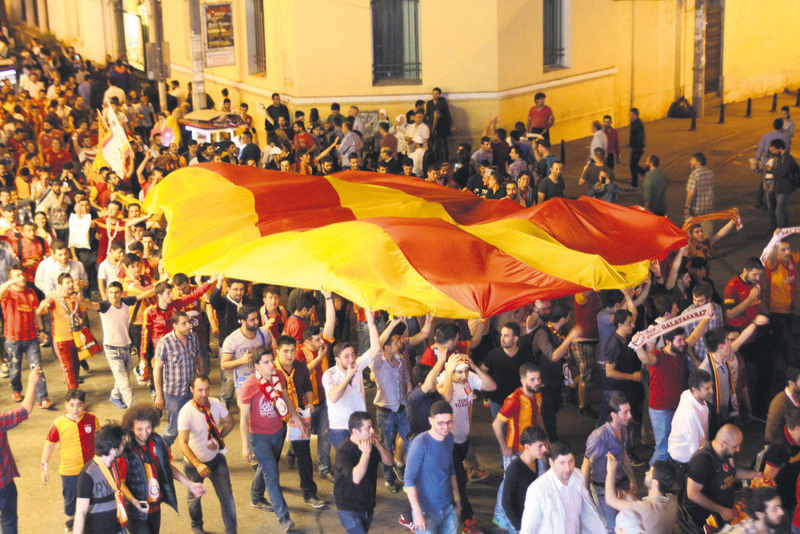 After Galatasaray cleared the biggest hurdle on their road to the championship by beating archrivals Beşiktaş 2-0, they won a guaranteed place in the Champions League along with archrivals Fenerbahçe

The Spor Toto Super League's breathtaking title race peaked with a big derby on Sunday as Galatasaray defeated rivals Beşiktaş 2-0 at the Turk Telekom Arena in Istanbul on Sunday. As a result, Beşiktaş have failed to qualify for the Champions League next season while Galatasaray and their followers in the table Fenerbahçe have guaranteed a place in the Champions League next season. Leaders Galatasaray now have 76 points. While Beşiktaş come in third with 66 points, the other championship candidate Fenerbahçe are behind Galatasaray with 70 as of press time. They played away against Istanbul Başakşehşir late Monday. As for the game, home side Galatasaray started strong with winger Yasin Öztekin finding the net in the 11th minute. Galatasaray made it 2-0 in the 80th minute of the game as Dutch playmaker Wesley Sneijder smashed the ball from outside the area into the goal. Galatasaray have never lost a match in which Sneijder has scored this season.

The Dutch star has found the net 10 times and Gala have earned 15 points thanks to his goals. Öztekin is also one of the architects of Galatasaray's success, rising to prominence after Italian coach Cesare Prandelli was fired. He only wore Gala's jersey for 152 minutes during the Prandelli era. However, with Hamza Hamzaoğlu having taken over the top job, he has increased his goal tally to four, adding 13 assists and taking to the field 17 times in 22 games. Before kick-off, Galatasaray fans in the stadium performed a choreographed show symbolizing the club's possible 20th domestic league title. After the derby win, fans across Turkey poured down into the streets with Galatasaray flags and started to celebrate the 20th title and four stars late Sunday. Gala coach Hamzaoğlu said in the press conference that his side deserved the win. He said, "We got a vital win against Beşiktaş. It was very important in the title race. We maybe did not play well. But my players did everything that they ought to have done to get the good result. We won three points deservedly."

Commenting on Burak Yılmaz's reaction after he was taken out of the game, Hamzaoğlu said, "No player wants to be taken out of the game. But in the last minutes it was wiser to continue with a defense player like Umut Bulut than to continue with a striker. Burak was not playing badly. He may be upset but it's not important unless he continues to act like that. And he did not anyway. We hugged each other after the match."
RELATED TOPICS