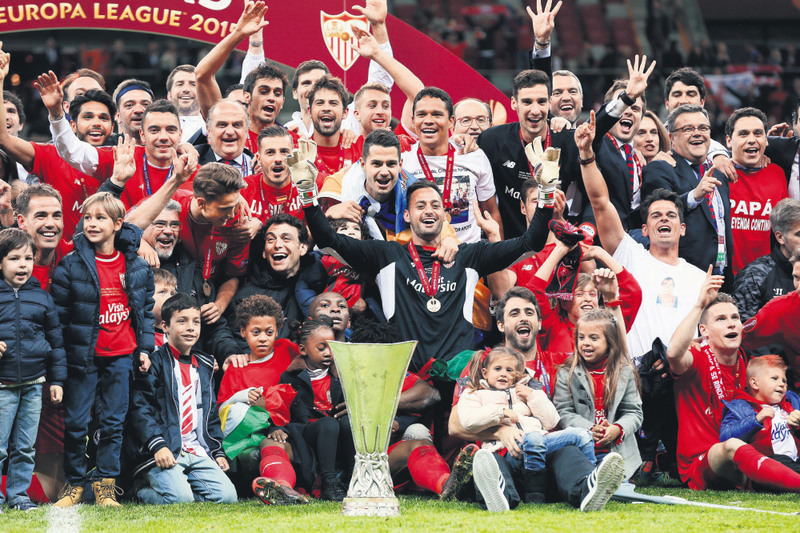 by May 28, 2015 12:00 am
In the end the harsh realities of a gap in class, budgets and big time experience came to bear on Wednesday's Europa League final as favourites and holders Sevilla retained the trophy. But it was not before Ukraine's Dnipro Dnipropetrovsk gave one of Spain's top sides the fright of their lives before going down 3-2 in an exciting final at Warsaw's National Stadium. At times, the team from an industrial city on the edge of Ukraine's war-torn eastern half looked out of their depth. Even their talismanic international winger Yevhen Konoplyanka, crucial in an improbable run past Ajax Amsterdam and Napoli in previous rounds, struggled to produce in a skittish first half hour against the experienced Spaniards.

There was arrogance too about Sevilla who, even after going behind to a rare Dnipro raid, ploughed on with measured attacks built on a back five who barely moved from their own half. The Spanish side took a 2-1 lead on the half hour and that seemed as if it might be the end of matters. But instead Dnipro, who had won just six of 14 games on their way to the final, dug in and found another goal and enough fight in the second half to make this an engrossing final. Their captain Ruslan Rotan, 33, who provided a moment of quality for the equaliser, had spoken before about the team's fight to reach the final, playing games hundreds of miles from home in the capital Kiev, initially to an empty ground. They were not about to give up without a fight. "They were more experienced but we tried to show a good way of playing," coach Myron Markevych told a news conference.

Dnipro's team of journeyman veterans from some of Europe's bigger leagues has been built on the money of Ukrainian billionaire Ihor Kolomoisky and his Privat banking group. Football statistics website Transfermarkt.com values the squad at about $110 million. But Sevilla, whose victory takes them automatically into the Champions League, are worth twice that and now have millions in midweek TV revenue to look forward to in addition to the money generated by Spain's globally popular La Liga. For the thousands of blue and white clad Ukrainian fans who made the trip to neighbouring Poland for the game three years after the two countries poured millions into hosting Euro 2012, there was solace in the occasion. "I want to thank you for this season, coach," one Ukrainian journalist told Markevych. "For once we are not watching the other teams play, we are here."