Football beats out baseball in game of US-Cuba detente 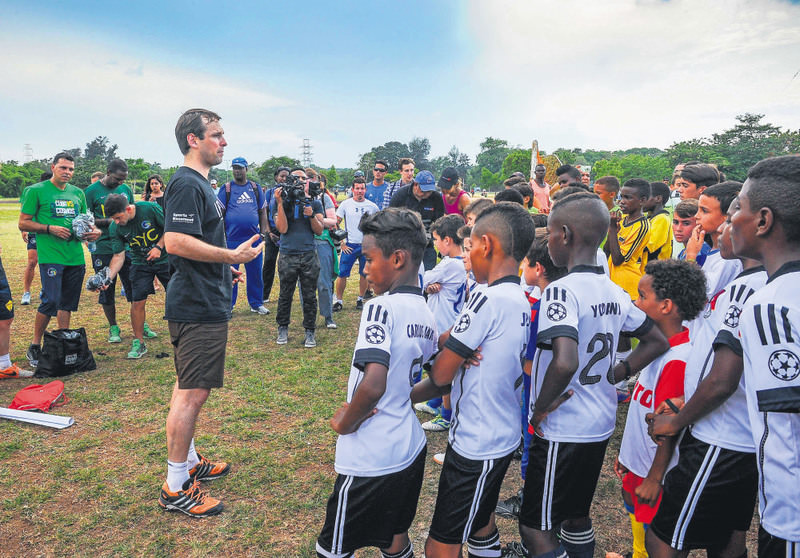 A New York Cosmos player speaks to children from Cuban football teams in Havana.
by Associated Press Jun 02, 2015 12:00 am

In a landmark act of sports diplomacy, football's New York Cosmos has become the first professional U.S. team to play in Cuba since Presidents Raul Castro and Barack Obama announced their countries would re-establish diplomatic relations

Football's popularity is growing in both baseball-crazy nations and Cuban officials said the friendly match against the country's national team is an important step in the normalization of the relationship between the U.S. and Cuba.

"In this new era that our two countries are living, this game is another link that will help establish the relations announced by the two presidents," said Antonio Garces, vice president of the Cuban FootballAssociation.

While the two governments have yet to reopen embassies following the December announcement of detente, Havana has been flooded by a surge of U.S. tourists as well as delegations of lawmakers, business executives and athletes.

A group of retired NBA stars held a training camp for Cuban players in April, and Cuban officials have said a U.S. professional baseball exhibition game is planned for the near future, although Major League Baseball officials have said no plans have been made.

"I'm happy that we came here to play Footballand unite two countries," Cosmos midfielder Walter Restrepo said. "The people have really welcomed us, with high expectations for the game."

Garnering much attention in Cuba were former Real Madrid star and current Cosmos player Raul Gonzalez and the team's honorary president Pele, the legendary Brazilian star who played for the original Cosmos franchise as his career was ending.

"I never imagined that Cuba against the Cosmos would happen. And to think Raul and Pele would come to Cuba, nobody thought that," fan Yosbani Fuentes said. Asked about the bribery scandal that exploded last week in football's global governing body, Pele declined to criticize FIFA or its head, Sepp Blatter.

"We are players and we want to provide joy to the public and people. What happens with executives doesn't interest me," Pele said. "He's a man who has been there 25 years. You have to respect him."

While Cuba is far from a football powerhouse, the sport hasn't been spared the waves of departures that have robbed its teams of many top-ranked athletes. Forward Maykel Galindo left in 2005 and went on to play for several U.S. teams. Midfielder Osvaldo Alonso abandoned Cuba two years later and now plays in Seattle.

"Football is a people's sport that's gained a lot of popularity in recent years, in Cuba and the United States, and without a doubt it'll help tear down barriers and open doors," Garces said.

The last professional U.S. football team to visit Cuba was the now-defunct Chicago Sting, which played in 1978 after President Jimmy Carter sought to improve relations with Cuba and opened the interests section in Havana that both countries want to soon convert into a full embassy.
Last Update: Jun 02, 2015 10:51 pm
RELATED TOPICS