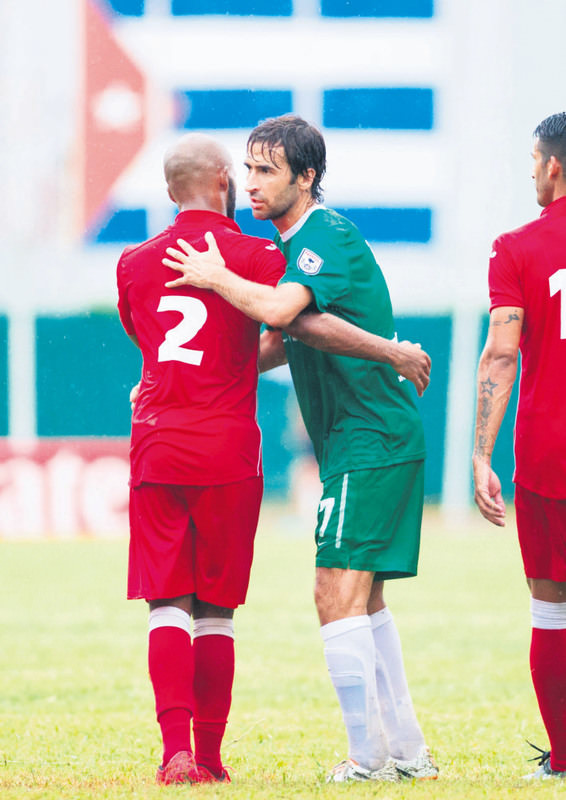 by Daily Sabah with AP Jun 03, 2015 12:00 am
The Cosmos defeated Cuba's national team 4-1 Tuesday in a friendly that was the first visit to the island by a U.S. professional team since the two countries began their detente effort in December.

A franchise that brought Brazilian superstar Pele to America in the 1970s was greeted warmly before the match as both national anthems were played. And even as the Cosmos dominated the action, the locals were, well, friendly.

"I felt like the atmosphere from the fans was phenomenal," said forward Lucky Mksona, who scored twice. "Everyone was just trying to support us wherever we went and I think that was big for us today."

The game was played in a persistent rain that prevented the 74-year-old Brazilian soccer legend from making the symbolic opening kick. But thousands filled the stands at Pedro Marrero stadium, cheering on the game with a series of soccer songs and chants.

After the final whistle, Cosmos players saluted the audience, which responded with applause and cheers.

Soccer's popularity is growing on this baseball-crazy island, and officials held up the game as another important step in the moves by the U.S. and Cuba to normalize relations after decades of Cold War antagonism.

The New York team was the first professional U.S. soccer team to play in Cuba since the now-defunct Chicago Sting visited in 1978. President Jimmy Carter made an attempt then to improve relations with Cuba and opened the U.S. interests section in Havana that both countries want to soon convert into a full embassy.

Mksona scored in the seventh minute and again in the 41st, sandwiched around goals by teammates Sebastian Guenzatti in the 31st and Hagop Chirishian three minutes after that.

"We were able to find good spaces wide, get good crosses in, and the guys were able to make runs inside the box and finish with quality," Cosmos coach Giovanni Savarese said. "We had a lot of patience. Sometimes the headers didn't go to goal, and we pulled it back and found more open players to score."