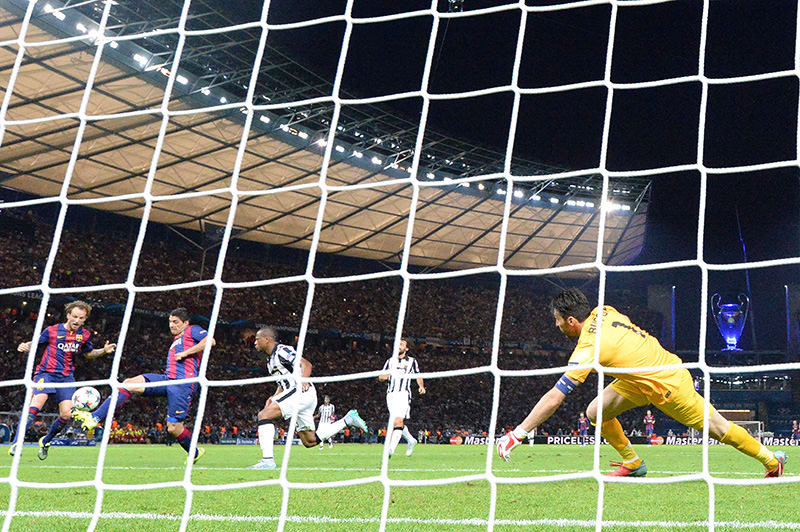 | AFP Photo
by Jun 06, 2015 12:00 am
Barcelona clinched a fifth European champions title with a 3-1 victory over Juventus in the Champions League final in Berlin Saturday.

Juventus went behind in the Olympic Stadium to a finely-worked early goal from Ivan Rakitic as Barca stamped their authority on the game.

Veteran keeper Gianluigi Buffon kept the Serie A champions hanging on with saves from Dani Alves and twice from Luis Suarez, before Juve came back with a stunning equalizer 10 minutes after the break from Alvaro Morata.

But with Juve enjoying their best spell, Barca struck in the 68th minute when Buffon could only parry a Lionel Messi shot and Suarez followed up to score.

Barca completed the scoreline in the seventh minute of stoppage time when Juve threw everything forward and were hit on the break with Neymar finishing.

Barca, under coach Luis Enrique in his first season, have now repeated the treble of league, cup and Champions League they achieved under Pep Guardiola in 2009 and become the first club in history to claim all major trophies in a season twice.

Every Barca outfield player touched the ball before their fourth-minute opener which caught Juve cold after a sweltering day and warm evening in Berlin.

But it was Messi's crossfield pass to Jordi Alba on the left which initiated the goal. Alba knocked the ball to Neymar who moved out of the area before turning and slipping the ball neatly inside to Andres Iniesta.

The Barca captain may have thought about a shot but saw Rakitic in front of goal, and the Croatian swept the ball with his left foot past Buffon - who had yet to touch the ball - into the net.

Messi, often dropping deep, was the architect of much of Barca's opportunities in a flurry of early chances.

Vidal fired over for Juve and Neymar shot past the upright after taking a Messi pass, while Buffon prevented a second Barca goal with a quick reflex to parry an Alves effort after Suarez cut the ball back.

Juve's sporadic forays into the Barca half hinted they could be a threat. Javier Mascherano had to cut out a Paul Pogba cross, Morata shot wide and Claudio Marchisio fired just over the bar - although it would not have counted following a foul.

Juve also protested they should have had a penalty when Pogba went down under a Jordi Alba challenge, although TV replays showed the ball was played and the incident was also just outside the box.

Barca, however, were soon back on the front foot, and Suarez toe-poked the ball just wide and a minute later had an effort parried away for a corner by Buffon.

Buffon saved from Suarez and Messi fired over the bar after a one-touch festival with Neymar and Suarez as Barca began the second half again looking dangerous.

But Juve made Barca pay with a goal after there seemed little danger. A Marchisio back heel suddenly opened up space for Stephan Lichsteiner, who found Carlos Tevez lurking in the middle. His shot was saved by Marc-Andre ter Stegen, but Morata followed up from close range.

Barca restored the lead thanks to a run from near the halfway line and shot from Messi, which Buffon could only turn into the path of Suarez.

Neymar then headed what looked like a third three minutes later but Turkish referee Cuneyt Cakir, after consulting the official behind the goal, disallowed the goal for handball - the Brazilian having headed the ball into net via his hand.

Xavi came on with 12 minutes for Iniesta for a Barca farewell in his last appearance before leaving for Qatar.

By then the Barca faithful were in full throat, but Juve, two-time European champions in 1985 and 1996, had not given up, and Marchisio saw a shot saved by ter Stegen.

It was not to be for Massimiliano Allegri's side with Neymar's goal the last action of the game to make it 3-1 - with Barca were celebrating a first Champions League win since 2011 and their fourth in nine years.
Last Update: Jun 07, 2015 12:03 am
RELATED TOPICS