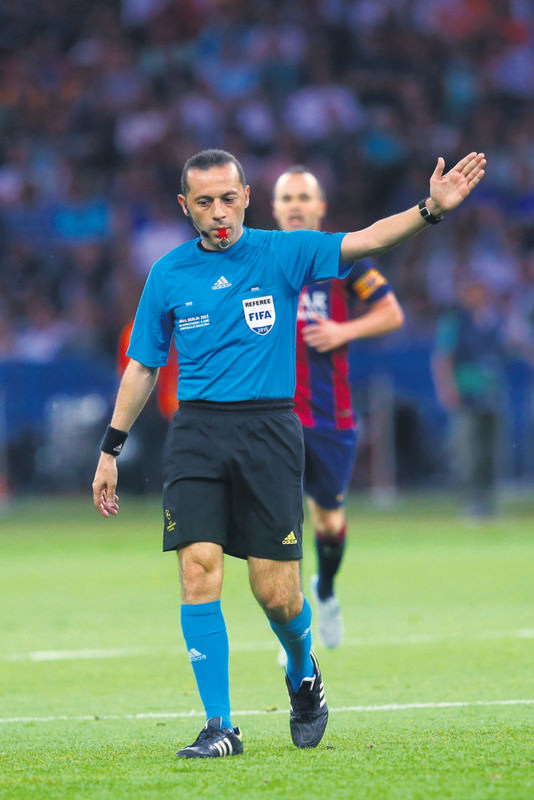 While Barcelona triumphed over fellow European giants Juventus, Cüneyt Çakır became the first Turkish referee to supervise a UEFA Champions League final. Çakır's decisions were both criticized and praised during the historic performance

Turkish football was proud of sending a referee to Champions League for the first time. Cüneyt Çakır became the first Turkish referee to supervise a UEFA Champions League final. Çakır's decisions were both criticized and praised during the historic performance. He showed three yellow cards to Arturo Vidal and Paul Pogba from Juventus and Luis Suarez from Barcelona. Pogba lambasted Çakır after the Turkish official turned down Juventus's appeals for what could have proved a crucial penalty in the 3-1 UEFA Champions League final defeat to Barcelona. "I should have had a penalty," he told Sky Sport Italia.

And Neymar thought he had made it 3-1, before actually make it 3-1 with the last kick of the game, but the assistant referee Hüseyin Göçek rightly spotted that the Brazilian's header came off his hand before going past Gianluigi Buffon. And this decision was praised widely. Çakır has shown his first card, a yellow, to Juventus midfielder Arturo Vidal for clipping Sergio Busquets. He is not shy about pulling out red cards in big games. At the 2012 Club World Cup final, the 38-year-old from Turkey sent off Chelsea's Gary Cahill and Corinthians won 1-0. In 2013, he sent off Manchester United's Nani in a Champions League last-16 match. Çakır's assistants at the Olympic Stadium are his countrymen Bahattin Duran and Tarık Ongun. The fourth official is Jonas Eriksson from Sweden. Two additional assistant referees, Hüseyin Göçek and Barış Şimşek were also from Turkey. A reserve assistant referee, Mustafa Emre Eyisoy, completed the officiating team. UEFA President Michel Platini handed the Champions League medal to Cüneyt çakır in the ceremony following the game.

As for the game, Barca's dazzling attacking play and Juve's resilience, which kept them in the game until Neymar wrapped up a 3-1 win in stoppage time, recalled the free-scoring early years of the competition in the 1950s and 1960s and provided a wonderful finale to the 60th season of UEFA's flagship club competition.

From the moment Croatia midfielder Ivan Rakitic swept Barca ahead in the fourth minute the match held the promise that something special was about to unfold - and it did. Both teams went looking for goals.Lionel Messi, who for once failed to score, Luis Suarez, who did after 68 minutes, and Neymar, who added the third, ended the season with a staggering 122 goals between them.

Their brilliance in front of goal has brought Barca a fifth European crown and their second treble in seven seasons, but the real key to the game's majesty was that Juventus were still in with a chance until Neymar scored with the last kick. The Italians were undone for the first goal by a move, involving 16 passes in the build-up, that included all 10 of Barca's outfield players as Andres Iniesta provided the final ball for Rakitic to sweep past goalkeeper Gianluigi Buffon. But Juve forwards Carlos Tevez and Alvaro Morata continually threatened to produce something and finally did after 55 minutes when Barca's German keeper Marc-Andre ter Stegen parried Tevez's shot but was unable to stop Morata following up on the rebound. Juve's joy did not last long, though, as Suarez scored 13 minutes later when he also pounced on a rebound to make it 2-1.

Almost a year ago, Suarez was the most vilified man in football after biting Italy defender Giorgio Chiellini at the World Cup, but he found redemption with what looked like the winner until Neymar arrowed in the third.

Barca's defence, with Gerard Pique and Javier Mascherano outstanding, was also inspired on the night, and it had to be. The Italian double winners served up some wonderful inter-passing of their own that recalled some of the glorious movement typical of the Juve team starring Michel Platini in the 1980s. That side's major honour came on the night of the Heysel Stadium disaster 30 years ago last week when Platini, now UEFA president, scored with a penalty in a 1-0 win over Liverpool.

Although he wished his old club had won on Saturday, there was no mistaking his pleasure in handing Xavi the trophy as Barca's talisman celebrated his last match for the club after more than 750 appearances by lifting the European Cup. It was a night that in the end belonged to Barcelona but, more importantly perhaps, helped restore the game's reputation after a calamitous two weeks in which it has been reeling from corruption allegations surrounding world governing body FIFA.
Last Update: Jun 08, 2015 1:43 am
RELATED TOPICS