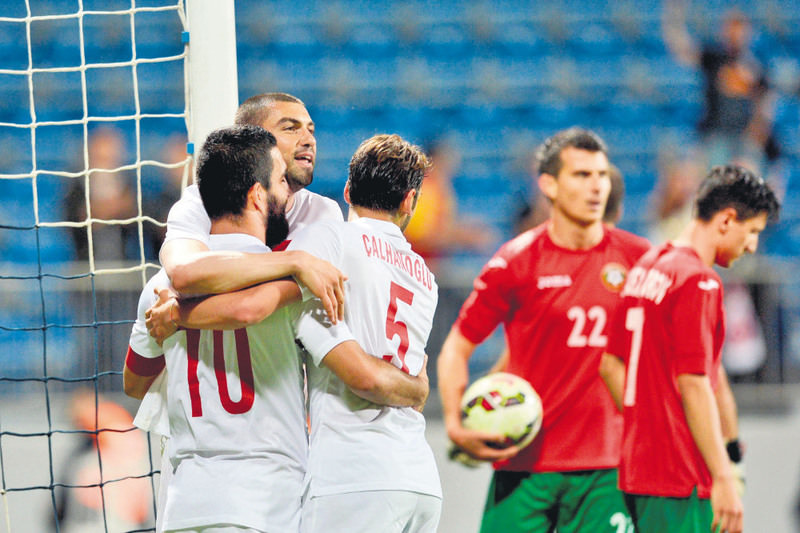 by Daily Sabah Jun 09, 2015 12:00 am
Turkey ran out 4-0 winners against Bulgaria in a friendly at the Recep Tayyip Erdoğan Stadium on Monday, with Hakan Çalhanoğlu and Burak Yılmaz both scoring twice. The win gives the team hope ahead of the Euro 2016 qualifying match that Turkey will play against Kazakhstan on June 12 after they made a strong impression against Bulgaria. The two sides played out a goalless first half but Çalhanoğlu needed only four minutes of the second to put his side into the lead. And five minutes later, he doubled Turkey's advantage. Yılmaz then netted twice more, his first strike of the game coming two minutes after Çalhanoglu's second, to secure a big win against Bulgaria. Turkey travel to Kazakhstan in their Euro 2016 Group A qualifying campaign, where they are currently fourth.

National team coach Fatih Terim said, "The winning desire of my footballers made me proud and happy. We had a chance to see and evaluate many players during the game. Although the season has ended, I observed the sacrifice, desire and concentration of my footballers for being the winning side. They have played at least 50-60 games and they sacrificed a lot by playing so well in a friendly game. It must be appreciated.

"We played effectively, especially in the second half. I would like to see this performance in the Kazakhstan match. It is very important to get three points over there. After that our players deserve a good holiday.

"Hopefully we will beat Kazakhstan. After that match we will play three of four games on our soil. We play better each passing day. My biggest problem is that I can't gather the same squad. I hope there will be no injured footballers anymore. I believe Turkey will have a national football team that can make the whole nation happy with their playing style."

On Hakan Çalhanoğlu, who was dropped by Terim after an altercation with fellow national team player Gökhan Töre, Terim said, "Çalhanoğlu played very well. I never casted him away. But sometimes you may experience such bitter things. Hakan hits the ball well especially in dead ball situations. He unlocked the Bulgarian defense. They got along well with Burak Yılmaz."

Çalhanoğlu said, "We want to return from Kazakhstan with a victory and three points"
Last Update: Jun 10, 2015 3:39 am
RELATED TOPICS