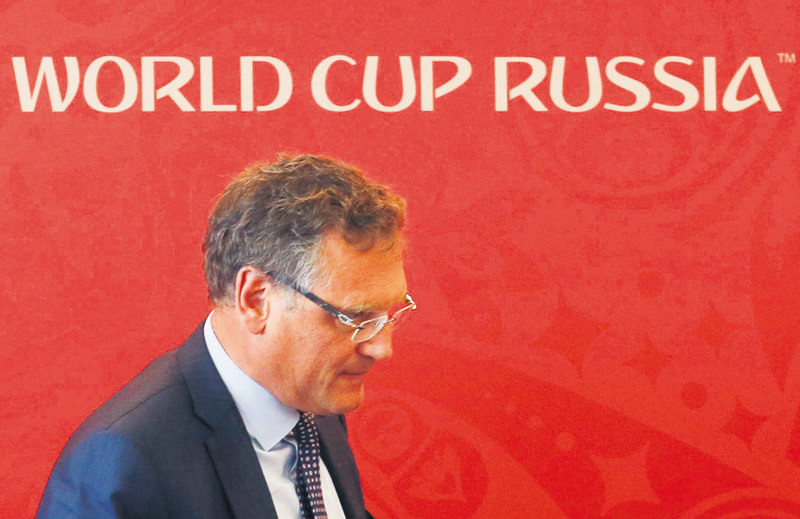 by Daily Sabah with Wires Jun 10, 2015 12:00 am
FIFA has suspended the 2026 World Cup bidding process amid a widening corruption scandal implicating previous bid contests. FIFA secretary general Jerome Valcke says it would be "nonsense" to begin the process now. FIFA planned to write to its 209 member federations this week to explain the bidding timetable and rules. The 2026 host is expected to be chosen by the 209 members at their May 2017 meeting in Kuala Lumpur, Malaysia. Potential bidders include the United States, Mexico, Canada and countries from Europe. Meanwhile, Valckedismissed allegations of wrongdoing over $10 million in bank transactions that are under investigation by U.S. authorities. The transactions are central to a U.S. bribery investigation against soccer's governing body. In an emotional appearance at a news conference in the Russian city of Samara, he said there were no grounds to blame him or FIFA over the way the funds were used. He also said he had not been questioned by Swiss prosecutors or police.

Scandal-hit FIFA will hold an extraordinary executive committee meeting in July to discuss dates for the election to replace president Sepp Blatter, who announced his resignation last week, according to Reuters. Soccer's governing body said in a statement that there were "various date options" for the extraordinary Congress and did not confirm a report by the BBC that the election would take place on Dec. 16. Last week, Domenico Scala, head of FIFA's audit and compliance committee and the man responsible for overseeing the election, said it could take place any time between December and March. Blatter tendered his resignation last Tuesday, less than a week after Swiss police staged a dawn raid on a luxury hotel in Zurich and arrested several officials on corruption charges filed by U.S. prosecutors in New York. However, Blatter is intent on staying in office until his successor is appointed and wants to lead the effort to clean up his federation. Jordan's Prince Ali Bin Al Hussein, who lost out to Blatter in the election, is tipped as a possible candidate while Chung Mong-joon, the billionaire scion of South Korea's Hyundai conglomerate, is also weighing up a bid to replace Blatter.
Last Update: Jun 10, 2015 11:29 pm
RELATED TOPICS