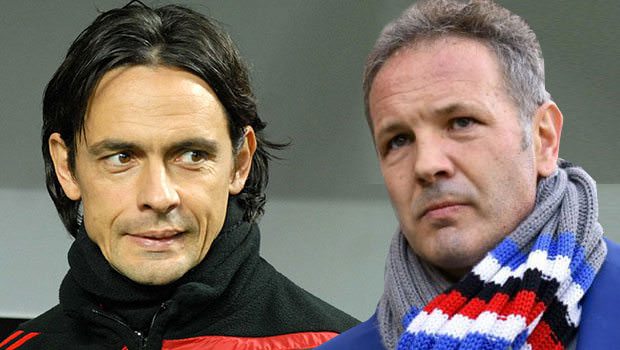 by Daily Sabah with Wires Jun 17, 2015 12:00 am
AC Milan fired coach Filippo Inzaghi and immediately replaced him with Sinisa Mihajlovic on a two-year deal on Tuesday.

Milan informed Inzaghi he was unwanted earlier this month, but was hoping to terminate his contract under mutual terms. The talks apparently failed.

"AC Milan communicates that Filippo Inzaghi has been dismissed," the club said in a statement.

In his first season in charge, Inzaghi led Milan to a dismal 10th-place finish. Still, having been a standout striker for Milan, Inzaghi commanded respect within the club.

Mihajlovic has an option for a third season, at a reported 2.5 million euros ($2.8 million) per season.

The 46-year-old Mihajlovic coached Sampdoria for the past two seasons, leading the Genoa club to seventh this year.

Mihajlovic previously coached Bologna, Catania, Fiorentina and Serbia's national team. The Serbian was also a standout fullback as a player for Sampdoria and Lazio, known for his skill on free kicks.

Former Milan coach Carlo Ancelotti, who was recently fired by Real Madrid, rejected offers to return to the Rossoneri.

Sagging financially and with club president Silvio Berlusconi no longer buying the world's top players, Milan has been on a downward spiral. Since winning Serie A in 2011, Milan has finished second, third, eighth, and 10th thus failing to qualify for Europe for a second consecutive season.

Berlusconi is close to selling a 48 percent stake in Milan to a Thai investor, in a deal that could reportedly be worth up to 470 million euros ($530 million).

Milan also has plans to build a new stadium, although nothing has been finalized yet.
Last Update: Jun 17, 2015 3:33 am
RELATED TOPICS