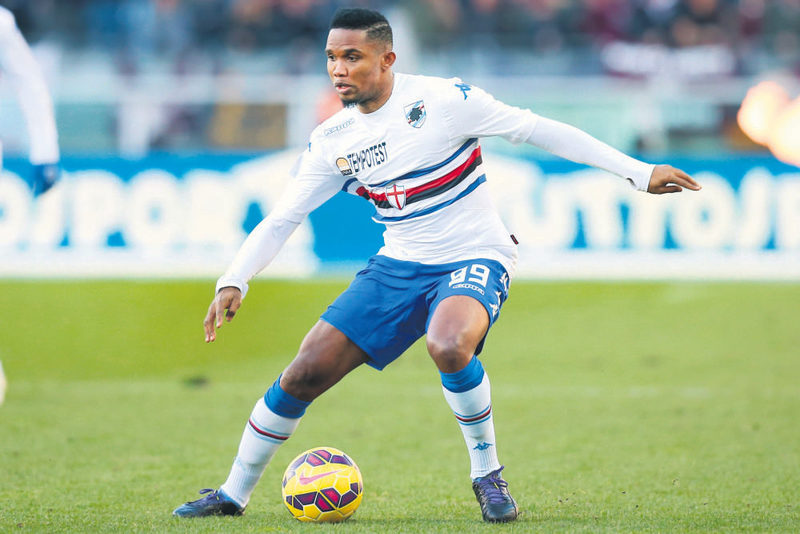 by Hakan Baş Jun 17, 2015 12:00 am
In Turkey, there has been a running joke for years: Eto'o is done. It means that Eto's transfer is done. Some years ago, a Turkish TV commentator Oktay Derelioğlu said self-assuredly: "Eto'o (transfer) is done" And he repeated it several times. The transfer rumor, which was based on Derelioğlu's source, was not right and the Cameroonian did not come to Turkey. After that, "Eto'o is done" turned into a joke. It went viral and comical videos were made for websites like YouTube. But, this joke is about to become real. Sampdoria striker Samuel Eto'o is reportedly close to joining Turkish club Antalyaspor. The newly promoted Spor Toto Super League club's chief Gültekin Gencer insists his deal in Italy will be terminated, allowing him to make the move. "We have reached an agreement with Eto'o and his agent," he said. "We just need to work out some small details. The Sampdoria board has to terminate his contract first and they gave us confirmation that they will do so on Wednesday - then we can sign him." According to aksam.com in Turkey, a video conference call with Antalyaspor directors secured the terms for a transfer.

Gencer also said negotiations with Brazilian icon Ronaldinho, who currently plays for Queretaro in Mexico, will begin at the end of the week. "We are opening talks with Ronaldinho," the president confirmed. "His brother, Roberto Assis, will be in Antalya on Thursday. Then we will start the negotiations on Friday."

As well as Ronaldinho and Eto'o, the president also confirmed earlier this week that the club are interested in Netherlands international Ibrahim Afellay, who is out of contract at Barcelona this summer.

Sampdoria President Massimo Ferrero confirmed last week that Eto'o is likely to leave after just six months in Serie A.

The 34-year-old Cameroon legend signed a contract with Samp in January that ties him until June 2018. He is likely to agree to a termination by mutual consent, walking into another three-year contract in Turkey. Eto'o is well-travelled in recent years. Since leaving Inter for Anzhi in 2011 he has played at Chelsea, Everton and Sampdoria.
Last Update: Jun 17, 2015 10:57 pm
RELATED TOPICS