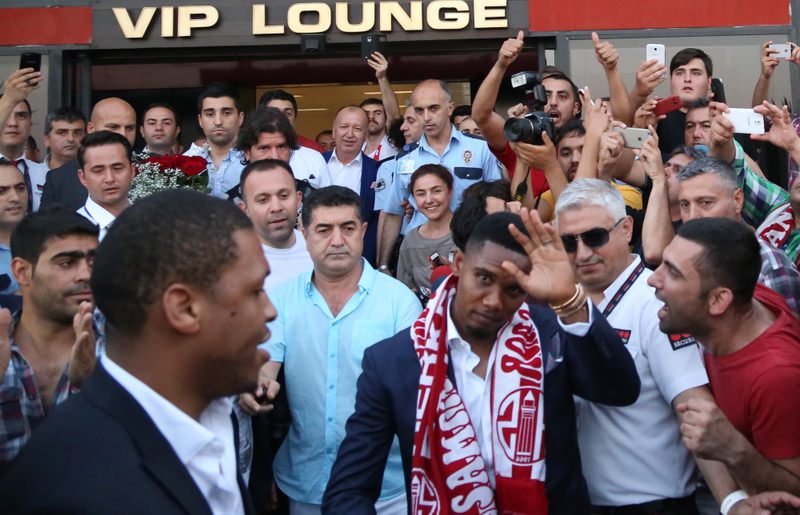 by Hakan Baş Jun 25, 2015 12:00 am
World famous Cameroonian football player Samuel Eto'o has finally set foot in Turkey, where he has been the subject of a classic joke for a decade. The joke is: "Eto'o is done," meaning the Eto'o's transfer is done. Some years ago, a Turkish TV commentator, Oktay Derelioğlu, said self-assuredly, "Eto'o [transfer] is done," repeating it several times. The transfer rumor, which was based on Derelioğlu's source, was not right and the Cameroonian did not come to Turkey. After that, "Eto'o is done" turned into a joke. It went viral and comical videos were made for websites like YouTube. But Antalyaspor have finalized the transfer, bringing Eto'o to Turkey on Wednesday. The Cameroonian star and Antalyaspor's President Gültekin Gencer were met by hundreds of enthusiastic fans at Antalya International Airport. The fans cheered Gencer and shouted "Bring us Ronnie," referring to Ronaldinho, another ambitious target for the club. Gencer replied by saying "wait until Saturday." Eto'o, accompanied by Gencer and other managers of the club, came to Antalya in a private plane.

As there were so many Antalyaspor fans waiting for him to arrive at the airport, the football player had hard time entering the VIP room. While the fans showed their love to Eto'o by cheering and firing torches, the Antalyaspor scarf around the neck of Eto'o stood out. "It is not an ordinary transfer; it is the transfer of Samuel Eto'o," said Gencer. He informed that they personally flew to Italy to seal the deal of Eto'o's transfer and continued, "As the planes were under overhaul due to Ramadan, we had a hard time finding a private plane. We asked the help of the Minster of Foreign Affairs Mevlüt Çavuşoğlu, who is also from Antalya, and he helped us to rent a plane. There are people who are jealous of Antalyaspor so they made statements that Antalyaspor went to get Eto'o with a state's plane. They wanted to defame our team." He said that Eto'o agreed with the deal without thinking as he once visited the city and loved it. "He got information about the city from his friends and said 'yes' right away. He came to the airport with his wife," Gencer said, adding that they are planning to hold a signing ceremony with the football player today. Eto'o has been well-travelled in recent years. Since leaving Inter for Anzhi in 2011 he has played at Chelsea, Everton and Sampdoria.
Last Update: Jun 25, 2015 10:25 pm
RELATED TOPICS