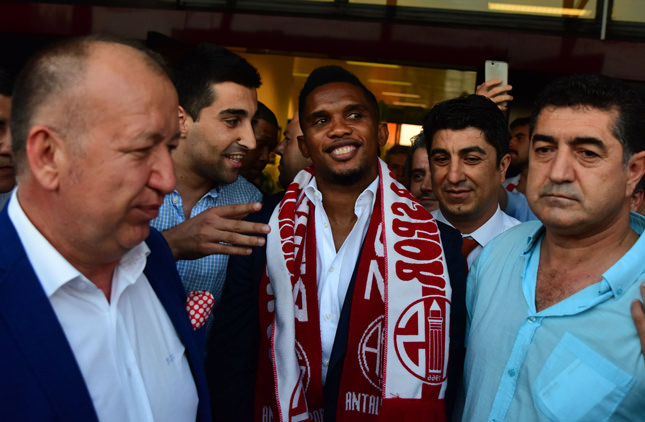 by Daily Sabah with AFP Jun 25, 2015 12:00 am
Cameroon's former international striker Samuel Eto'o is set to join newly-promoted Turkish side Antalyaspor from Sampdoria of Italy, the Turkish club said on Wednesday. The renowned striker passed the physical exam by team doctors and is ready to meet his new team in the following days.

Eto'o was greeted by thousands of fans as he arived in Antalya. One fan reportedly even passed out as he saw the striker exiting the airport.

Antalyaspor finished fifth in the 2014/2015 Turkish First Division but won promotion to the Super Lig after winning the play-offs.

Clearly intent on making an impact in the Super Lig, Antalyaspor sent a private jet to Italy with executives to negotiate with Eto'o and then bring him back to Turkey.

"An agreement has been reached in principle with the footballer Samuel Eto'o," Antalyaspor said in a statement, adding the plane bringing him to Turkey would land in Istanbul Wednesday evening.

Financial details have not yet been disclosed.

Turkey will be the latest stop in Eto'o eclectic career which has seen him perform for the likes of Barcelona, Inter Milan and Chelsea. He also played between 2011-2013 for Russian side Anzhi Makhachkala in the Caucasus region of Dagestan before the owner pulled the plug on its ambitions.
He had signed for Sampdoria only earlier this year.

The coach of the Antalya club in the popular Mediterranean resort, Yusuf Simsek, described the transfer of Eto'o as "very good and very useful".

"All the information and experience that he has accumulated will be transferred to his teammates," he told the Fanatik daily.

Simsek also revealed that Antalyaspor were targeting the former Barcelona and Brazil star Ronaldinho, saying talks with his lawyer and brother would be held in the next 1-2 days.
Last Update: Jun 25, 2015 1:27 pm
RELATED TOPICS