Tears for Bassett and England as World Cup dream ends 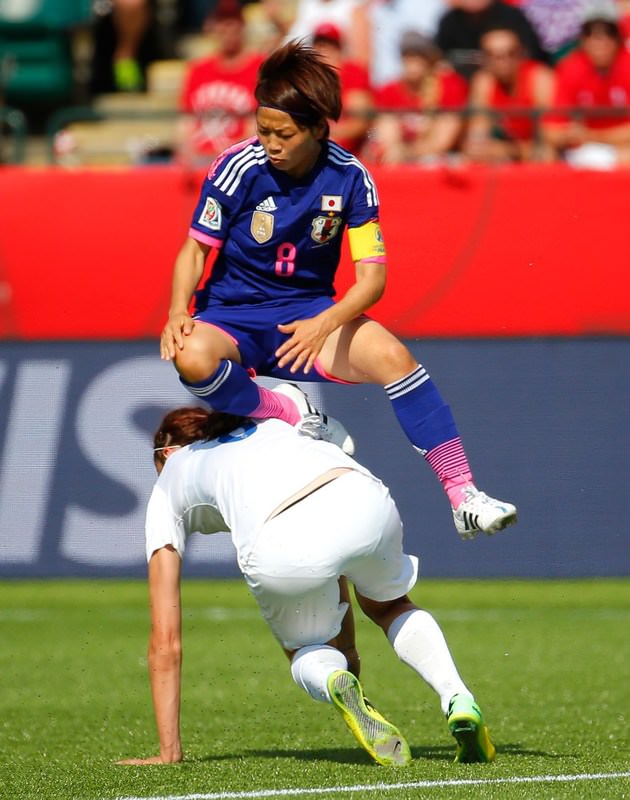 Aya Miyama of Japan leaps over Jill Scott of England during the 2015 FIFA Women's World Cup Canada 2015 Semi Final match between Japan and England at Commonwealth Stadium.
by Daily Sabah with Wires Jul 02, 2015 12:00 am

England's dream run to their first semi-finals at the Women's World Cup came to a heartbreaking conclusion on Wednesday, losing 2-1 to Japan following a dramatic 92nd-minute Laura Bassett own-goal.

The Lionesses had been causing the defending champions problems in Edmonton with Fara Williams' penalty five minutes before the break cancelling out a penalty kick by Japan captain Aya Miyama on 33 minutes.

But as the Japanese desperately pushed for the winner two minutes into stoppage time at the Commonwealth Stadium, Bassett's interception rebounded in off her own crossbar.

It put the holders through to a final rematch with 2011 runners-up the United States in Vancouver on Sunday.

Bassett, 31, was in tears and had to be consoled by her teammates and England coach Mark Sampson as she walked off the field, the Lionesses stunned, shocked and crying at the heartbreaking final turn. "It was a horrible moment, but you just have to look at how the team has supported her to understand that she'll be able to get over it," said Sampson.

"Every single member of our group were devastated when that ball went over the line.

"This group is so close-knit that the players are now friends for life.

"What a tough one to take. I can't really talk about the match right now, but I can talk about my team, who have sacrificed so much, and who have given sweat, blood and tears, while continuing to smile throughout.

"The players deserve to go back home as heroes. Laura Bassett is devastated after the own goal, but without her we wouldn't have been in this semi-final."

Sampson's side were just the third ever English team to reach a semi-final at a World Cup after the men reached that stage in 1966 and 1990.

But they would not be following in the footsteps of the men who went on to win the 1966 World Cup on home soil. "Japan are the world champions, and we saw why tonight. Whatever happens, they always manage to find a way of hanging on in a match, and tonight that helped them to reach the final," said 32-year-old Sampson, who took over in December 2013.

"But I've never seen a team put Japan under the kind of pressure that we did. That's almost worth a World Cup victory."

"That's football, it can be cruel sometimes but we have to try and pick ourselves up and play Germany on Saturday. "These are a bunch of girls that give everything for the jersey and are great people. We have tried to perform and get to the World Cup final, but it just wasn't to be."

Midfielder Williams tweeted: "Absolutely gutted but so proud of this team we gave everything.. #together."

And former England striker Gary Lineker, now a sports broadcaster, tweeted: "Despite the gut-wrenching nature of the defeat, England's women were terrific and should hold their heads high. Great effort!"