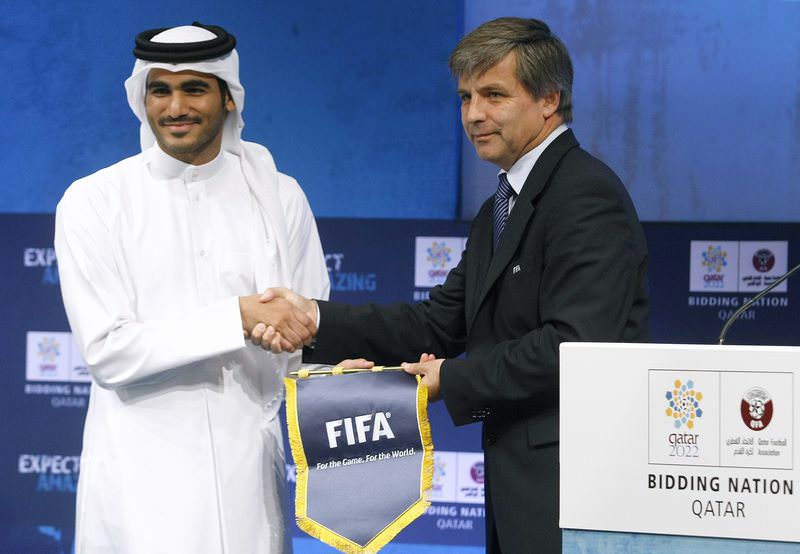 | REUTERS Photo
by Daily Sabah with AFP Jul 07, 2015 12:00 am
The head of FIFA's bid evaluation committee for the 2018 and 2022 World Cups has been banned for seven years after it was revealed that he had asked for favors from Qatar.

It was announced on Monday by FIFA's Ethics Committee that Harold Mayne-Nicholls, 54, was banned from "taking part in any kind of football-related activity at national and international level for a period of seven years."

The world governing body did not give details of the charges against Mayne-Nicholls, but said it was for a breach of a confidentiality rule in FIFA's code of ethics.

Mayne-Nicholls took to Twitter to confirm he would appeal the suspension, and question the decision to announce the ban before he has gone through that process.

"Concerning FIFA Ethics Committee ruling before the first instance, I will appeal to higher courts established in FIFA statutes and TAS (the Court of Arbitration for Sport)," he said.

"I wonder why @FIFAcom publishes a sanction that has outstanding resources, as this may be modified by higher courts.

"I ask for understanding. I can not comment because there is express prohibition
to inform by the Ethics Committee."

Mayne-Nicholls revealed in November that he was under investigation over emails he sent to the Aspire Academy in Qatar seeking internships for his son and a nephew. He also sought tennis coaching opportunities for a brother-in-law. He was at the time considering running against Sepp Blatter for the FIFA presidency.

The reports quoted an email sent to Mayne-Nicholls by a FIFA Ethics Committee deputy chairman, Cornel Borbely, which said the approaches were made "shortly after the inspection tour and prior to the issuance of the evaluation report on Qatar."

"Furthermore, said behavior seems to be a cause enough to doubt the integrity of the inspection process and your evaluations."

Mayne-Nicholls denied at the time he had done anything wrong.

FIFA said that Mayne-Nicholls was present at a hearing where the ban was decided and that more detailed information would be given after the final decision becomes effective.

Mayne-Nicholls, a former Chilean FA president, wrote the report that gave Qatar the worst ranking of the candidates for the 2022 World Cup finals which the wealthy Gulf state went on to win.

FIFA has since held an inquiry into the bid process for the 2018 World Cup in Russia and the 2022 tournament, and has changed the date of the Qatar tournament to November-December because of concerns about the heat.