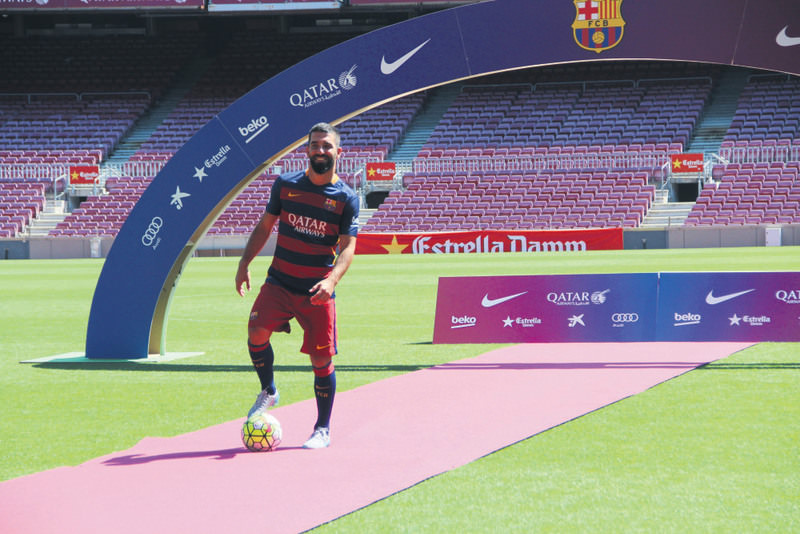 Turkey captain Arda Turan has been officially unveiled by Barcelona. "This is a great day for me. I am very happy. It is very important for my career and for my country that I have signed for FC Barcelona," Turan said

Barcelona unveiled their latest signing on Thursday: Turkey's Arda Turan. Turan, 28, was pictured standing in front of Barcelona's crest at the Nou Camp stadium. "It's a big day for me, and I am very happy," he told the club's website. "My transfer to Barcelona is very important for my career and country." Turan, who began his career at Galatasaray, attended a press conference on Friday after signing a 34 million euro, five-year-deal, making him Turkey's most valuable player of all time. Answering Turkish and foreign journalists' questions, Arda began by thanking his former club Atletico Madrid. He said, "First of all, I thank Atletico Madrid, its president, head coach [Diego] Simeone and my former team-mates. If I'm here now, I owe them. I thank Atletico fans. I hope I win many cups in Barcelona. He said: "I'm where I have always wanted to be. I'm very aware of Barcelona's grandeur, and it's not just a football club. I always felt close to Barcelona; my friends know that." Emphasizing that he received many offers and refused them, Arda added: "If you receive an offer from Barcelona, you rule out the other offers. Six months is not a long time. Waiting is not easy but I will work and wait to wear the jersey."

On Xavi, the Barcelona legend who left the club, Arda said: "Nobody can become Xavi and carry his responsibilities. I'm a different footballer. I have come here to do good things. Xavi is the idol of every football fan. Lionel Messi is the best, but my idol is Andres Iniesta. It's not important which position I play. I will work as much as possible and contribute to Barcelona. I played every position in midfield for Atletico Madrid." Talking about his ball boy days with Gala, Arda said: "When I was a ball boy in 2002 in the Barcelona-Galatasaray match, my current coach Luis Enrique scored a goal. But it was an offside goal. I only remember this. Those were the days. Every footballer was assigned these duties in his junior days. When I collected balls I enjoyed it very much."

Promising that he will work hard, Turan said: "I always respected the rivals I played against. I'm now at the club I enjoyed playing against most. Maybe I cannot play well every time, but I promise I will always work hard and do my best. I will show the best Arda Turan here.

"Cristiano Ronaldo is one of the best players in the world, but Messi is a very special one. His play is more suitable for team play. He is the best in football history. There will be no Messi for me in the future also. Jersey number is not important to me. We will negotiate with my fellow players and make a decision." Meanwhile, Prime Minister Ahmet Davutoğlu called Turan while on his trip to Bosnia-Herzegovina. Congratulating Turan, Davutoğlu shared a photograph, while calling Turan on the plane. Davutoğlu said: "We are proud of every citizen who is successful worldwide. I wish Arda Turan success in his career at Barcelona."
Last Update: Jul 10, 2015 9:44 pm
RELATED TOPICS