Casillas has emotional end to 25 years with Real Madrid 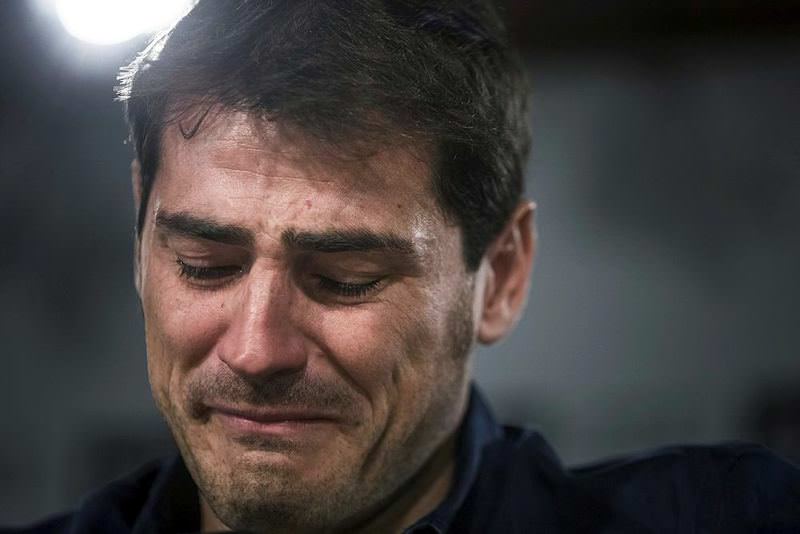 Casillas is moved as he address a farewell press conference.
by Associated Press Jul 12, 2015 12:00 am

Iker Casillas had no words of regret or rancor as he put an emotional end to his 25 years as a Real Madrid goalkeeper on Sunday, promising instead to "not let down" his new fans at FC Porto

A tearful Casillas struggled to read a statement during a press conference a day after Madrid announced Casillas was moving to the northern Portuguese club. "After 25 years defending the colors of the best team in the world, the difficult day has arrived when I say goodbye to the institution that has given me so much," Casillas said in what could be his final appearance at the Santiago Bernabeu.

"Thanks, a thousand thanks, I will never forget you. Wherever I go I will continue shouting 'Hala Madrid!'."

Around a hundred fans, some in Casillas shirts, braved the blistering summer sun and 37 degree Celsius (98.6 degree Fahrenheit) heat outside the stadium in hopes of a parting glimpse of the departing player.

Casillas, 34, joined Madrid's youth academy at age 9 before debuting for its first team in 1999. He won 19 trophies for Madrid, including three Champions League titles and five Spanish league crowns, while also captaining Spain to the 2010 World Cup and two European championships.

Avoiding any mention of Madrid president Florentino Perez or the drawn-out negotiations over the past week to complete his transfer, Casillas said his reasons for leaving were based on the interest shown by Porto.

"I am going to Porto for two reasons," he said. "The first is the excitement that the coach and the president of the Portuguese club have expressed, and, second, because of the messages of support I have received from their fans during these days. They have won me over and their interest has made me very happy. I will fight to the utmost to not let them down and win as many titles as possible."

Once considered a living Real Madrid legend who earned the nickname of "Saint Iker" for what his supporters considered his miraculous saves, Casillas struggled to regain his starting job and goalkeeping reflexes after being benched by former coach Jose Mourinho midway through the 2012-13 season.

His eventual fallout with some supporters that culminated in segments of the Santiago Bernabeu stands jeering him last season apparently played into Perez's decision to sell the tarnished talisman.

Casillas, however, has never spoken ill of Mourinho and he didn't change his stance on Sunday. He went out of his way to thank "all" the coaches he had had at Madrid, saying he had "learned so much" from every one of them.

Casillas said goodbye to his teammates on Saturday before the team left for Australia to start its preseason under new coach Rafa Benitez.

Casillas will join a Porto side that will play in the Champions League and aim to dethrone Benfica in the Portuguese league. Neither club has released the financial details of the deal, but Spanish media report Madrid is paying for part of Casillas' salary that was due to him over the final two seasons of his contract with the Spanish side. His departure and the injury to its other 'keeper Keylor Navas will increase pressure on Madrid to sign a new goalkeeper. Manchester United's David de Gea, a former Atletico Madrid product, is reportedly the player Perez wants.
Last Update: Jul 12, 2015 10:28 pm
RELATED TOPICS