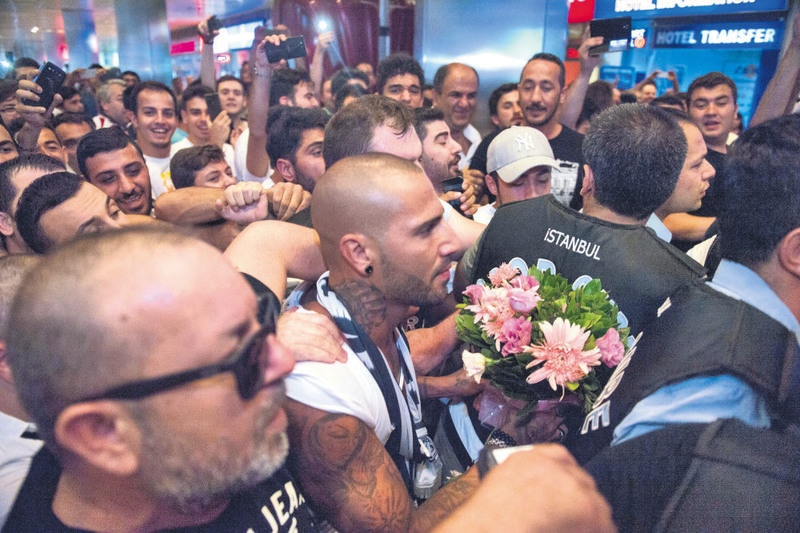 by Daily Sabah Jul 22, 2015 12:00 am
Having returned to Beşiktaş on Tuesday, Portuguese striker Ricardo Quaresma was met in Istanbul with great fanfare by Beşiktaş fans. The Turkish giants have secured the signing of Quaresma on a two-year-deal. The Portugal international completed his medical examination for the club yesterday and fulfilled his ambition of coming back to Istanbul.

Speaking to Beşiktaş TV, he said, "It's a great joy and happiness for me to return to Beşiktaş. I missed the tradition of Beşiktaş and love of their fans a lot. A thousand thanks to our fans for organizing for me such a wonderful welcoming ceremony. It's not important how many assists I will have or goals I score, what's important is to get the title and make happy our fans because the Beşiktaş fans are perfect. I played good matches here before. I want to continue to play and get the title. Şenol Güneş is a very experienced coach. I'm also happy to work with him." The 31-year-old winger was a fan favorite during his time at Beşiktaş, contributing to a string of dazzling performances during his time with the club between 2010 and 2012, scoring 19 goals and registering 20 assists.

The signing of Quaresma is also expected to quench the transfer thirst of Beşiktaş fans. Working on a limited budget and with a new stadium still under construction, the club has been outdone by Istanbul rivals Fenerbahçe and Galatasaray in the transfer market. The black and white club are also reported to have by-and-large secured an agreement with Fiorentina striker Mario Gomez.

Quaresma's career got a significant boost last season with FC Porto, where he made it to the quarter-finals in the UEFA Champions League before the Portuguese side was eliminated by Bayern Munich. His performance was also topped with a return to the fold of the Portuguese national team.
Last Update: Jul 22, 2015 11:40 pm
RELATED TOPICS