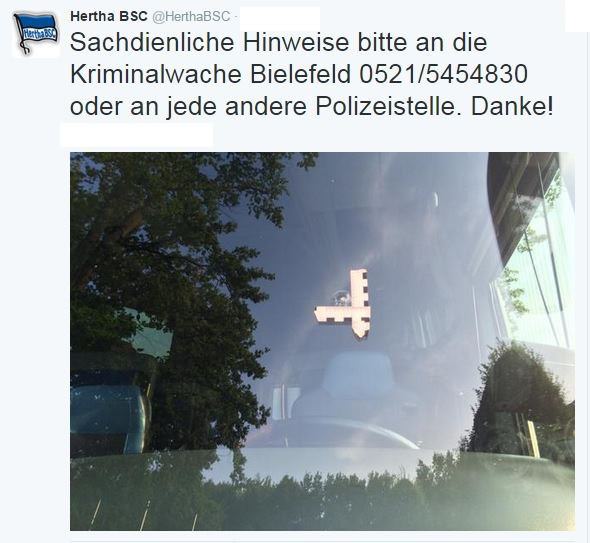 by Associated Press Aug 09, 2015 12:00 am
Hertha Berlin's team bus was shot at ahead of a German Cup match in Bielefeld, the Bundesliga club said Sunday.

There were no players on the bus at the time and no one was injured in the incident.

Hertha general manager Michael Preetz told German website Sport1 that the bus was overtaken by a motorcyclist who threatened the driver with his fist and then pulled out a pistol at a roundabout.

The shot did not penetrate the windscreen.Hertha tweeted pictures of the damaged windscreen, showing the bullet struck at the driver's head height.

"It was one shot but we cannot say what the motivation was," Preetz said.

"The bus driver immediately called the police and now the search is on for the culprit. This was an attack on life and limb and not a trivial matter. It's simply madness."

The bus driver was on his way to Bielefeld train station to collect the Hertha players and bring them to their hotel.

Bielefeld police are investigating the incident and were taking extra precautions to protect the Hertha players, the Berliner Zeitung newspaper reported.