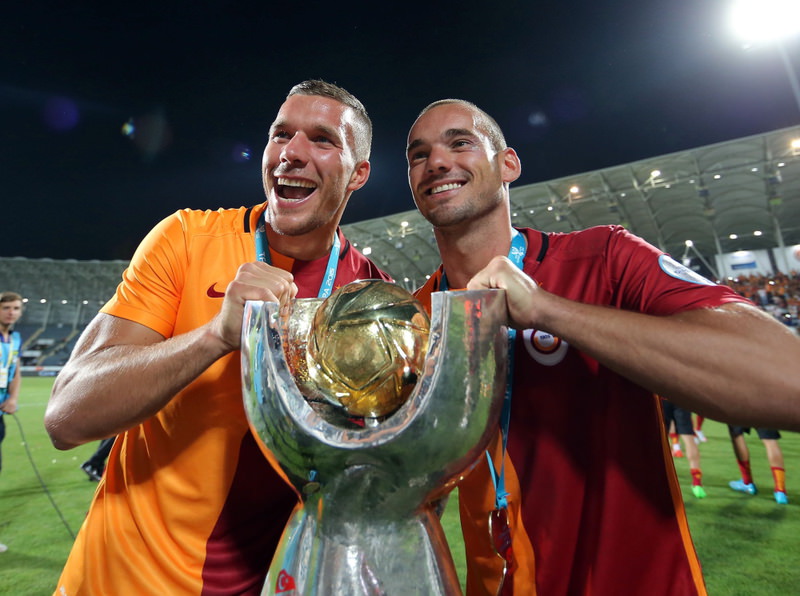 Galatasaray's star players Lucas Podolski and Wesley Sneijder said they were very happy to start the season with a trophy.
by Hakan Baş Aug 10, 2015 12:00 am

Having become the first Turkish club to wear a fourth star on its crest, the Lions have added the Super Cup to its cup collection following the Super League title and the Ziraat Cup

Having been crowned Super League and Turkish Cup winners, Galatasaray added another piece of silverware to its cabinet in 2015, winning the Turkish Super Cup on Saturday after a 1-0 victory against Bursaspor at Osmanlı stadium in Ankara. Yasin Öztekin scored the only goal in Galatasaray's 1-0 win over the Green Crocodiles. The Lions also beat Bursaspor in the Ziraat Cup final to win the double back in May. The Lions won the league title for a record 20th time last season and became the first Turkish club to wear a fourth star on its crest as a result.

Galatasaray finished the 2014-15 season with three top trophies to become the first club to win the "trilogy" for a second time. The Yellow-Reds taking the Super Cup surpassed their archrivals Fenerbahçe by being able to add a fourth Super Cup trophy to its club museum. The only thing that overshadowed the night was when Dutch star Wesley Sneijder reacted harshly after his coach Hamza Hamzaoğlu substituted for him. While Sneijder waited a while on the bench, he angrily threw his leggings down and went to the locker room. But neither Sneijder's behavior nor Emre Çolak's red card hindered Galatasaray's glory, and the Lions grabbed their fourth Super Cup, a record in Turkey. The first such trilogy in Turkey was achieved by Trabzonspor in the 1976-77 season in which the Black Sea team won both the league title and the Presidential Cup (then Super Cup) and Turkey's Cup.

Meanwhile, Galatasaray's star players Lucas Podolski and Wesley Sneijder commented on the win. Podolski said: "It's wonderful to start the season with a trophy. It was my first official match in Galatasaray. We have a long way ahead of us. It was very important to me to win a trophy. I'm waiting im

patiently for the first match that we play at home. We are still not ready. Many of our footballers play on national teams. I'm not fully ready too. I have not played enough matches. Last season was not good for me. I need to play more matches. As long as I play my performance will improve. We played against a powerful team. Our new aim is to win the next league match. By the way, Galatasaray fans are fantastic. More than 5,000 fans met me at the airport. It was unbelievable and a big surprise for me. In this match our fans provided great support for us."

Sneijder said, "To win the third trophy is a very special feeling. It was important to start the season with such a big success." The Galatasaray administration condemned an attack by Bursaspor fans before the game. Bursapor fans threw stones at the Galatasaray team bus and hammered it. Galatasaray kick-off their league campaign against Sivasspor next week at 4 Eylül Stadium.

Galatasaray were champions in the regular season, finishing three points ahead of Fenerbahçe. Bursaspor performed better in the domestic cup. They entered the tournament in the third round. They won their third round match against Tepecikspor. In the group stage, they drew Mersin İdmanyurdu, Fatih Karagümrük, and Samsunspor but were in first position in the group. In the round of 16, they beat İstanbul Başakşehir. They won their quarterfinal match against Gençlerbirliği. The semi-finals were the toughest home and away matches for Bursaspor, as they struggled against Fenerbahçe but were winners. In the 2015 Ziraat Cup Final, Galatasaray defeated Bursaspor, but Bursaspor gained a ticket for the Turkish Super Cup final, since Galatasaray is the league champion.
Last Update: Aug 10, 2015 2:18 am
RELATED TOPICS