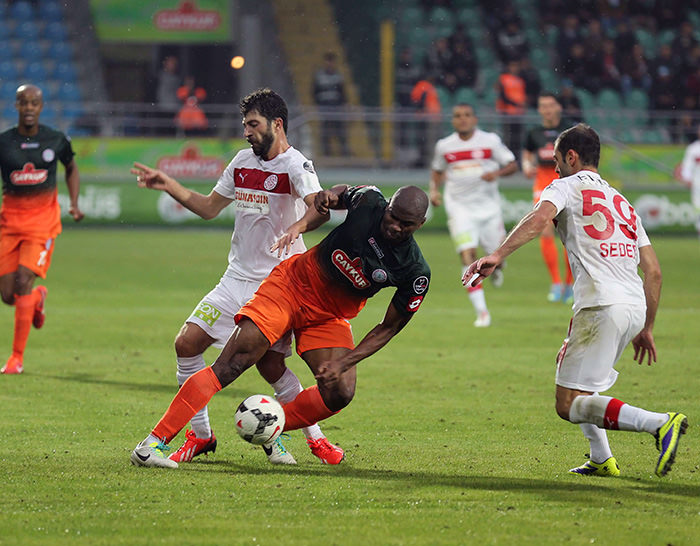 |AA Photo
by Hakan Baş Aug 18, 2015 12:00 am
Spor Toto Super League fans witnessed an interesting event this week as player and coach squared off. In the match between Çaykur Rizespor and Gençlerbirliği on Sunday at the Ankara 19 Mayıs Stadium, Rizespor came to the fore with Ahmet İlhan's goal in the 45th minute.

Hosts Gençlerbirliği equalized with Nemanja Tomic's goal in the 59th minute and later made it 2-1 with Panajotis Dimitriadis's goal. During the last minutes of the match, a quarrel erupted between Rizespor's Cameroonian forward Leony Leonard Kweuke and coach Hikmet Karaman.

Karaman wanted Deniz Kadah to take the penalty kick but Kweuke walked up to take the spot-kick and insisted on taking the penalty. Interest and tempers flared as Karaman gestured at the rebellious footballer in a threatening way. It was understood from his lips that he used graphic language when addressing the African striker.

However, Kweuke took the kick and found the net. After that he pointed to Karaman, advanced towards him and screamed the F-word. His team-mates just prevented him from attacking his coach. And later he found the net one more time and brought victory to his team 3-2 and subsequently burst into tears.

But neither coach nor club tolerated the disobedience on Tuesday despite the golden three points. It was announced that Kweuke would train separately from the squad until a decision is made about him by the club administration.
Last Update: Aug 18, 2015 6:00 pm
RELATED TOPICS