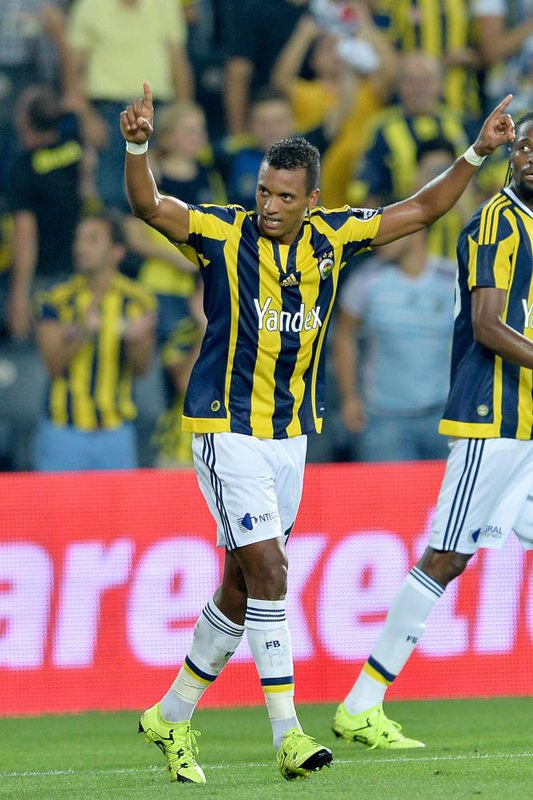 Fenerbahçe defeated Antalyaspor 2-1 in the Spor Toto Super League with Nani standing out, scoring two goals including the winner with a free kick that sealed the victory in the last minute of injury time

Fenerbahçe beat Antalyaspor 2-1 thanks to the Nani's last second goal at the Şükrü Saraçoğlu Stadium on Sunday taking them to the top of the Spor Toto Super League.

Although their fans turned the Şükrü Saraçoğlu Stadium into a cauldron, Fener were unable to start the game in the way that they would have wanted to although they did at least hand over very few opportunities to their rivals. The home side went into the half time locker room with a 1-0 lead after Nani fired the Yellow Canaries ahead in the 42nd minute.With Fener starting well in the second half, their Czech defender Michal Kadlec made a mistake in the 70th minute and Antalyaspor's Brazilian midfielder Guilherme Milhomem Gusmao provoked the stadium into stunned silence by finding the net in the 70th minute. As time ticked away and hope drained out of the home faithful, Nani took to the stage one more time and scored a miraculous goal in the very last second of the game - so late in fact that the referee did not even allow Antalyaspor to restart the game and whistled as soon as Nani scored. The Portuguese scored from a controversial free kick after Kadir Bekmezci had fouled near the box. The Antalyaspor players and administrators objected strongly to the decision to give Fener the all-important last-second free-kick. Fener raised their points tally to seven, ahead of Trabzonspor with the same amount of points, while Beşiktaş are in the third with six points.

Vitor Pereira was relieved after the final whistle. "I think the newspapers must write that there was a team who wanted to win from the first minute until the last minute. We played a very important match three days before [against Atromitos in the Europa League playoffs]. It was important because we could have said farewell to the UEFA Europa League in the playoff stage. That match was very exhausting for us. If we had left the field with only one point tonight, it would have been a shame. Our only mistake was the goal we conceded. I was devastated after that goal. The fans who come here come because they want to watch a good match. They don't come here to watch the players who lie on the field faking injuries. Despite fake injuries we managed to overcome our rival. I congratulate our fans because they gave us some fantastic support.

"Diego Ribas put in a great performance. He moved the team forward wonderfully. I don't comment on individual players usually. But I saw a magnificent Diego on the pitch tonight."

The Portuguese coach hugged a ball boy after Nani's last minute goal, with footage going viral on the Internet. He said, "My feelings can change during the match. We found many positions but the ball refused to go in no matter what we did. After the goal I wanted to share my strong emotions. In that moment I would have liked to hug all the fans.

"Everybody will talk about Nani's goal. But we were the dominant side from the first minute until the last minute. Our rivals' morale w

as raised because they had won the first two matches of the season."

Antalyaspor's defender Kadir Bekmezci complained after the game about the decision to give Fener a free kick late on, claiming his innocence over the decision as well as his disappointment at not having left Istanbul with at least a point. He said, "I never touched the rival player and the referee whistled for a foul. I don't think I committed a foul. The referee killed us with that decision. We started the league with two wins. We wanted to get three points or one point from Fenerbahçe."

Goal-hero Nani claimed the free kick decision was at least mitigated by the no-penalty call by the referee earlier in the game.

Nani said, "We got the three points that we deserved. We were very tired after the Atromitos match three days ago. The result is very fair because we were the dominant side. We tried to score until the last minute. In the last minute I believed in myself when I took the free-kick. I scored the goal which brought us victory. It was also a very good goal. Besides, the referee did not award us a penalty earlier but I respect his decisions."

During the international break, Turkey are to face Latvia on Sept. 3 and the Netherlands on Sept. 6 in the Euro 2016 qualifiers.
RELATED TOPICS